Every political argument seems to eventually boils down to polls. It makes sense since polls indicate what the majority wants and the majority should be listened to, right? If, for example, the majority of Minnesotans support stricter gun laws, then the politicians should respect their desires, right?

A majority of Minnesotans support stricter gun laws in the United States, including wide backing for a ban on military-style rifles and for raising the age for gun purchases from 18 to 21, a new Star Tribune Minnesota Poll has found.

This is usually the point where I would point out the way polls are manipulated to get desired results. For example, if you poll urban individuals about gun control, you’re likely to get a different result than if you poll rural individuals. Likewise, if I’m a publication with a predominantly Democratic readership, the results of my poll about gun control laws are going to differ from the poll results achieved by a publication with a predominantly Republican readership.

Instead of focusing on why polls are irrelevant due to ease of manipulation, I’m going to focus on an even lower level assumption made by people who cite polls: that a majority is right. Take it away, Mises! 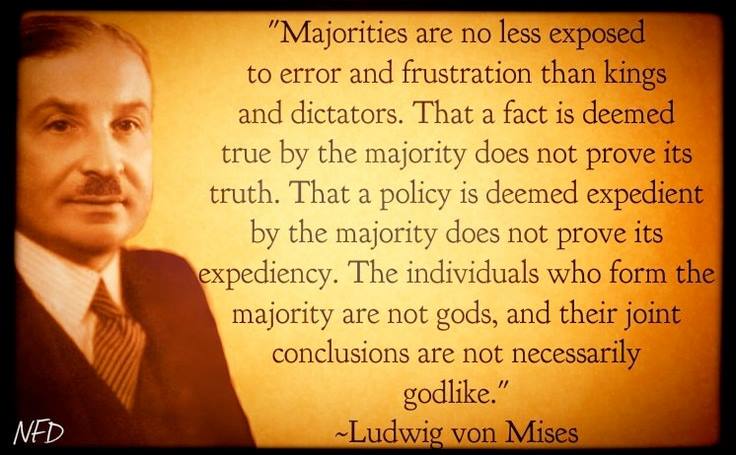 Stating that the majority supports a law is irrelevant because there is no inherent wisdom in the majority. For example, if a majority favored a law that required the first born son of every family to be sacrificed to Beelzebub, would you agree that a law requiring that be passed? I’m guessing most people wouldn’t because it’s an awful idea. I’m also guessing that some proponent of democracy will dismiss my example and by extent my argument as being ridiculous, which it is because I chosen it specifically to illustrate my point in the most hyperbolic manner possible. To appease those individuals though, I will present a more realistic example.

Let’s say a few individuals own businesses in a poor neighborhood. The majority of people living in the town decide that they want to revitalize that neighborhood. To accomplish this they demand that the city government pass a new property tax to raise funds for revitalization efforts. Interestingly enough, the demanded property tax is high enough that it would force the poor businesses in that neighborhood to close shop. Should the will of the majority be followed even though it’s obvious that their idea of revitalizing the neighborhood is to use the city’s tax code to run poor individuals out of town?

The premise of democracy, that the will of a majority should become the policy of the State, is flawed at its very foundation because it necessarily assumes that what a majority wants is correct. This is why I dismiss arguments based on the will of a majority outright. Saying that a majority supports something is no different than saying that you personally support something. Saying that you or a majority support something isn’t an argument in support of that thing, it’s merely an expression of personal preference. And, unfortunately for you, I don’t give a shit about your personal preference.

3 thoughts on “It Doesn’t Matter What the Majority Says”