A bunch of conservatives threw a tantrum because Nike chose an individual who failed to stand during prayers to skycloth as its mascot. While a bunch of triggered snowflakes cutting up their socks and burning their shoes is mildly entertaining, this has the potential to be extremely entertaining:

Ford, (F)a sponsor of the National Football League, has voiced support for NFL players exercising their right to free speech and peaceful protest after President Donald Trump urged fans to consider a boycott.

“We respect individuals’ rights to express their views, even if they are not ones we share,” the company said on Monday. “That’s part of what makes America great.”

Queue a bunch of triggered conservatives burning their Ford F-150s.

Yeah, I know it won’t happen. Virtue signalling only goes so far. Some people may be willing to cut up a $10 pair of socks or even burn an old pair of shoes to demonstrate their virtuousness, but few are willing to destroy a vehicle worth tens of thousands of dollars to show the world how much they love the skycloth.

Nike announced its new mascot, Colin Kaepernick. Since Kaepernick made a name for himself by failing to stand during prayers to skycloth, a lot of conservatives are upset with Nike and have chosen to make Nike feel their impotent rage:

Following the announcement, the hashtags #BoycottNike and #JustBurnIt started trending on Twitter and shares started falling. Some angry consumers even posted photos and videos of themselves burning their Nike shoes and other gear to protest the company using the divisive figure in its 30th anniversary ad campaign.

I ask you this, is there a more useless way to protest a company than destroying your own property? I can’t think of one. If you purchase a pair of Nike shoes and later burned them, it doesn’t hurt Nike one bit, the company already has your money.

With that said, I am glad that Nike chose Kaepernick as its mascot, not because I feel that a backup quarterback best represents the company but because the memes that have sprung forth have been solid gold! This one is my favorite so far: 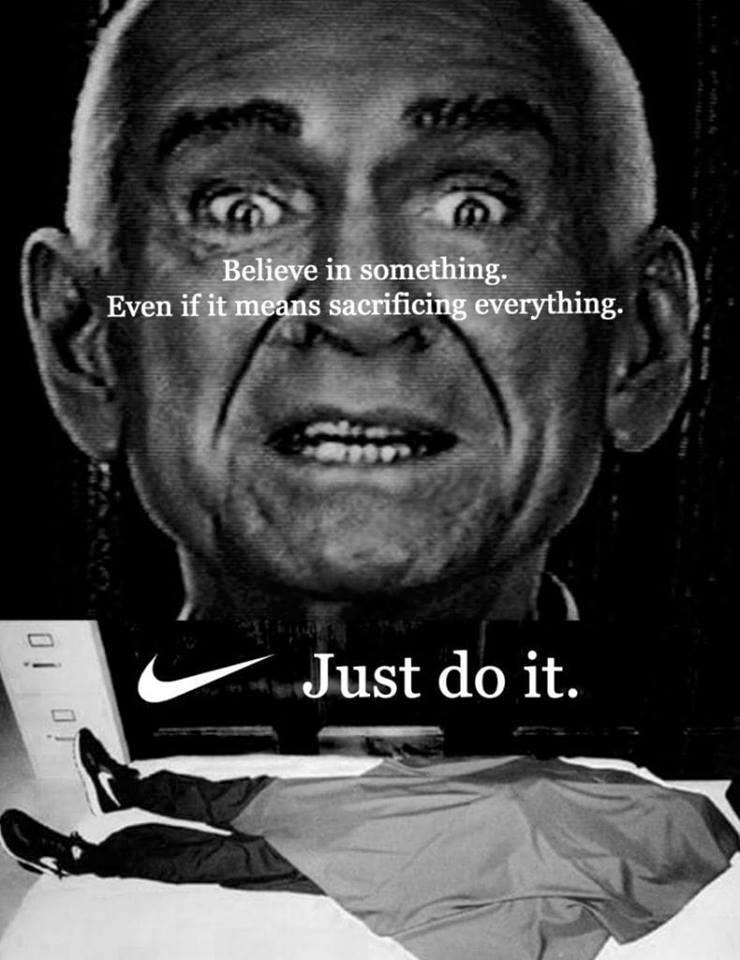 The powers of the current United States president never cease to amaze me. For example, he apparently remembers the bombing of Pearl Harbor:

“I remember Pearl Harbor,” Trump reportedly told Abe as part of a tirade against the U.S. trade deficit with Japan. The president reportedly wanted better deals to help U.S. car and beef producers.

Considering Pearl Harbor was bombed in 1941 and Trump was born in 1946, he apparently has a really good memory, just the best.

If you’re ever feeling particularly stupid, just remind yourself that somebody actually published this:

With the possible exception of the U.S. military (including veterans and families), no group was more indebted to Sen. John McCain (R-Ariz.) than the human rights community.

When an organization is named People for the Ethical Treatment of Animals (PETA) you might make the mistaken of assuming that it is an organization that focuses on fighting animals abusers, not how fictional animals are portrayed on a bag of snacks:

(AP) — After more than a century behind bars, the beasts on boxes of animal crackers are roaming free.

Mondelez International, the parent company of Nabisco, has redesigned the packaging of its Barnum’s Animals crackers in response to pressure from People for the Ethical Treatment of Animals.

PETA, which has been protesting the use of animals in circuses for more than 30 years, wrote a letter to Mondelez in the spring of 2016 calling for a redesign.

Far be it for me to tell others what battle are or aren’t important but the fictional conditions of fictional animals that represent what you’re about to bite the head off of (because all normal people start by biting the head off of animal crackers) seems pretty insignificant to me.

One of the “wonders” of the modern United States is that you can just say any old shit and get away with it:

Bonafide patriot woman and “Fox & Friends” middle-seat host Ainsley Earhardt made an oopsie during a Thursday morning rallying cry for America when she made reference to the never-existent “communist Japan.”

This is an example of a very prevalent phenomenon here in the United States, and from what I’ve seen the rest of the world, where people feel free to talk authoritatively about shit they know nothing about.

I’m currently reading a book on the history of Japan from the Meiji Restoration to modern times. I just got to the beginning of World War II. Although I was vaguely familiar with this aspect of Japanese history, after reading the chapters dealing with the 1920s through the 1930s I now understand just how anti-communist the Japanese government was at that time (and that attitude didn’t stop in the 1940s). This doesn’t surprise me since the Japanese government at the time was strongly focused on the emperor and communists hate emperors (the name specifically, they prefer the term chairman or premier).

Now that I’ve read that part of the book and have familiarity with the topic, I won’t shy away from talking about it. However, before that I would have shied away from talking about the Japanese government at that time because I wasn’t very familiar with it and I try to avoid talking authoritatively about things that I’m not familiar with. I also feel that I’m in the minority when it comes to that.

Many socialists like the say that advocates of capitalism only advocate capitalism because they see themselves not as members of the lower and middle classes but as future millionaires.

Of course, most of the socialists who say that don’t see themselves as members of the lower and middle classes but as future members of the politburo.

August 6th was the anniversary of the atomic bombing of Nagasaki. Many people posted about it. Many people pointed out that it was a heinous act because an estimated 39,000 to 80,000 people, most of whom were civilians, were killed.

Meanwhile the firebombing campaign against Tokyo, which resulted in the death of approximately 100,000 civilians, is seldom mentioned.

My point here isn’t to judge people for mentioning one without mentioning the other. It’s to illustrate that the psychological impact of the atomic bomb was so great that we still feel compelled to discuss the matter today even when we don’t have the same compulsion towards other acts that lead to even great losses of life.

I was attending the Reddit Moderator Roadshow last night and didn’t have an opportunity to get any posts written.

If you have the opportunity to attend one of their other events, take it. It was a ton of fun.

I imagine that MGM’s public relations people are having a rough day:

The owner of the Mandalay Bay hotel in Las Vegas has filed a lawsuit against more than 1,000 victims of a mass shooting that killed 58 people in 2017.

It turns out that MGM Resorts International is being sued by groups of victims of the Las Vegas shooter and this lawsuit is an attempt to establish that it is not liable for the harm caused by the shooter. Good luck to MGM’s public relations people on explaining that though.