I’m a history buff. I know, what fun blogger isn’t? But my interest in history doesn’t lie in anything specific. While there are a few historical topics that greatly interest me such as feudal Japan and Viking Age Europe, I generally find myself studying random topics because something about that topic piqued my interest. Recently I’ve found myself interested in the history of alchemy, the predecessor to chemistry. To satisfy this interest I have been reading The Secrets of Alchemy (Synthesis) by Lawrence M. Principe. It’s an excellent title if you are interested in the topic.

During the first part of the book, which discusses Greco-Egyptian alchemy, there is a short discussion of the monetary debasement that was occurring in Rome at the time. As I didn’t expect to find a common thread between my interest in alchemical history and economic theory this discussion surprised me. As it turns out Diocletian was busy debasing the Roman currency by reducing the amount of precious metal in issued coinage.

Diocletian apparently ordered the destruction of all alchemical literature involving silver and gold. While alchemists at the time had not found a way to transmute base metals into noble metals they did find numerous ways to make base metals look like, at least on the surface, noble metals. In addition to writing down processes for making base metals appear to be noble metals the alchemists also wrote down processes for discovering such slights of hand. The theory put forth in the book, which I find very intriguing, is that Diocletian ordered the destruction of alchemical works involving silver and gold because he didn’t want the knowledge about how to detect debased currency to spread.

One of my favorite aspects about studying history is finding all of the common threads that run between my various interests. This story was certainly one of the most interesting collision between my interests that I’ve encountered.

I’ve had a fascination with Japanese history since college. There’s something about an island that maintain a mostly isolated existence from the rest of the world for hundreds of years that makes for some interesting studying. My fascination is what motivated me to take up classes to learn how to properly wield a samurai sword. It’s also what makes photographs such as this one really neat: 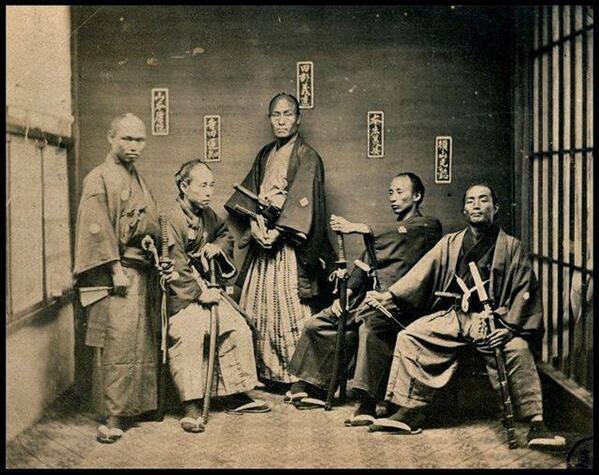 I stumbled across this picture on the @History_Pics Twitter account, which I encourage you to follow if you have an interest in general history. There has been some very interesting photos posted on that feed and this one just happened to fit my interests enough that I found is worth posting.

Something that gets lost in most national conflicts is that every story has two sides. In the United States and much of the European world only one side of the Israeli-Palestinian conflict is presented. We’re expected to believe that Israel is the benevolent angel who spread all good things throughout the Middle East while Palestine is the satanic demon who spreads plague and destruction. Whenever the two nations get into a pissing competition everybody blames Palestine or Hamas and never even acknowledges that possibility that Israel plays a great part in the hostilities.

I’m not going to spend a great deal of time discussing the conflict, instead I’m going to present Wikipedia articles that cover the history of Israel and Palestine. Why Wikipedia? I know people like to dismiss anything on Wikipedia as horribly inaccurate but it’s generally a decent source of information for topics that aren’t horribly controversial. While the conflict itself is controversial the history of what has occurred generally isn’t. Furthermore Wikipedia free and generally cited making it more useful to link to than books. It’s almost guaranteed that somebody will dismiss everything I’m about to link to as being inaccurate because it doesn’t fit their view of reality. If that’s what you want to do so be it, I’m posting this information primarily for the sake of those looking to do some reading on the precursors to recent events.

Events occurring today were really put into motion after World War I. In the aftermath of World War I the region we now know as Palestine was put under control of the British who had defeated the Ottoman. From the beginning things didn’t go well as the Arab and Jewish populations of Palestine didn’t like each other. The animosity between both peoples eventually lead to the United Nations (UN) looking at splitting Palestine into two states.

The UN Partition Plan wasn’t well received by Palestine’s Arab population. Even though the major of Palestinians were Arab the UN Partition Plan would grant the Jewish state 56 percent of the land, including two thirds of the coastline and sole access to the Red Sea. Granting the smaller Jewish population the majority of Palestine was justified by claiming that extra territory would be necessary for the immigrating Jewish population. As one can expect the Arab population didn’t like this plan and opposed it, claiming that the plan was not in the best interest of the majority of Palestinians (who were Arab).

Ignoring the Arab’s opposition the UN voted in favor of the Partition Plan, after some underhanded tactics were used to guarantee votes. This sparked the Arab-Israeli War. Internal conflict between the various involved Arab nations eventually lead Israeli to victory and they claimed ownership over the areas delineated by the UN Partition Plan.

Fast forward to 1967 when the Six Day War broke out. The Six Day War was a conflict between Israel and a coalition consisting of Jordan, Syria, and the United Arab Republic (what is now called Egypt). By the end of the war Israel seized the West Bank, Jerusalem, the Sinai Peninsula, and the Gaza Strip. Israel implemented an Iron Fist strategy where it ruthlessly suppressed Palestinian nationalism. Needless to say a Palestinian uprising was inevitable and it happened 1987 as the First Intifada in Palestine began.

The First Intifada was a campaign consisting primarily of nonviolent actions including civil disobedience, general strikes, and boycotts of Israeli products with some violence thrown in for good measure (you can’t have a peaceful revolution without some asshole throwing a Molotov cocktail). Israel responded to the First Intifada by killing over 1,000 Palestinians and arresting 120,000 more. Intra-Palestinian violence claimed the lives of some 1,100 Palestinians so they still managed to kill more of their own people than Israel did.

Relations between the Palestinians and Israelis didn’t improve. A Second Intifada began in 2000. Unlike the First Intifada, which relied heavily on nonviolent actions, the Second Intifada was marked with violence conflicts between the the Palestinians and Israelis. During this conflict the Israelis implemented a strategy of destroying homes of Palestinians. When a member of a family performed a violent attack against Israeli forces the Israelis would demolish the entire family’s home. Most people would state that this action is prohibited by the Fourth Geneva Convention but Israel says it’s perfectly legal because Palestine isn’t a recognized state (apparently the Israelis believe only recognized states are protected by the Geneva Conventions). Regardless you can see how the strategy of destroying homes could create some hard feelings with Palestinians.

In 2006 Hamas won the Palestinian legislative election and Israel responded by blockading the Gaza Strip. This brings us to the current conflict between Israel and Hamas. The blockade is seldom discussed in the news and when it is there are very few details given. Israel’s blockage of the Gaza Strip includes restrictions on travel and severe restrictions on what goods can enter the region. Foodstuffs, tin cans, crayons, musical instruments, and all manners of construction materials are on the blacklist. It’s not hard to see how resentment could develop under such sanctions. When you can’t even get basic construction materials such as concrete into your region things are not going to go well, especially when homes are being bulldozed. Israel also maintains a naval blockade that restricts both importing goods and fishing (fishing is only allowed 3 nautical miles from shore).

To understand the Israeli-Palestinian conflict of today one must look to the history of the conflicted region. What I’ve provided here is a bare minimum thumbnail overview of what has lead to the current conflict. My goal was to give you launching points to start your research. Whether you want to see the Israeli-Palestinian conflict as a black and white issue or as shades of gray is your business. I just feel the vast simplification that is generally presented by modern news outlets is a disservice and needs to be corrected.

Something that isn’t covered well enough in American history classes is the number of people butchered by Joseph Stalin. Stalin ordered the death of more people than Hitler yet we are still willing to gloss over that fact since the Soviet Union was our ally during World War II. Imagine though that you were the child of one of these murderous individuals, how would you go through life? In many cases the children of murderous authoritarians end up taking after their parents and end up being the next rulers of the countries their parents terrorized. Lana Parker took a different route, she defected to the United States and eventually returned to the Soviet Union which makes her case far more interesting:

Her three successive names were signposts on a twisted, bewildering road that took her from Stalin’s Kremlin, where she was the “little princess,” to the West in a celebrated defection, then back to the Soviet Union in a puzzling homecoming, and finally to decades of obscurity, wandering and poverty.

At her birth, on Feb. 28, 1926, she was named Svetlana Stalina, the only daughter and last surviving child of the brutal Soviet tyrant Josef Stalin. After he died in 1953, she took her mother’s last name, Alliluyeva. In 1970, after her defection and an American marriage, she became and remained Lana Peters.

Ms. Peters died of colon cancer on Nov. 22 in Richland County, Wis., the county’s corporation counsel, Benjamin Southwick, said on Monday. She was 85.

It is interesting to note that she defected after her father’s death and the defection didn’t appear to be related with the actions of Joseph Stalin. Personally I’ve always wondered what it must be like having a father or mother known first and foremost as a murdering tyrant. Some children end up following the parent’s footsteps while others seem to completely rebel and choose a different path in life. What shapes these decisions is most interesting to investigate and speculate on.

While she did publish an autobiography after defecting to the United States I would find it interesting if she were to have written another one later in her life after her return and eventual second departure from the Soviet Union. I’m sure her outlook would have been different and would certainly have been worth reading.

The dropping of the atomic bomb has been a controversial subject since, well, we dropped them. I, along with with people who have a grasp of history, believe dropping those two bombs was the right choice. But if you don’t have an understanding of history Borepatch has several examples of why invading Japan would have cost far more lives than dropping Little Boy and Fat Man did.