The the collectivist viewpoint, where individuals are seen as nothing more than a cog in the great collective machinery, and bigotry, and unwarranted hatred of a group of individuals, often go hand in hand. When one fails to see individuals and instead focuses on collectives it becomes much easier to despise entire groups with little or not reasoning. This leads people who think collectively to get very upset about individual action that doesn’t affect anybody else.

A recent story of a transgender teen not being allowed to attend school as a woman generated some outrage. Many neoliberals, social activists, and libertarians were outraged by the fact that her actions affect nobody else and therefore no ground exists for the prohibition. On the other side of the isle are the neocons and social conservatives who, well, basically echo this dude I came across on Facebook: 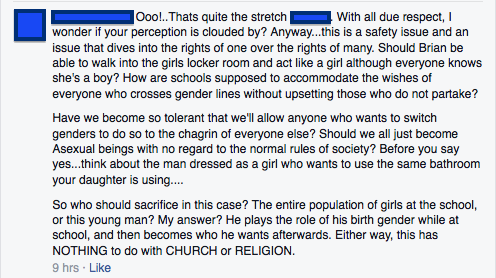 The opening of his final paragraph really takes the cake. According to his collectivist viewpoint the entire female population of the school will suffer if this transgender teen is accommodated. Earlier he stated “…think about a man dressed as a girl who wants to use the same bathroom your daughter is using…”, which demonstrates that he fears transgender individuals since he doesn’t want one of them in the same bathroom as another person’s daughter (it also demonstrates that he enjoys appealing to emotion when attempting to drum up support for his bigotry). It also demonstrates another common problem with collectivist thinking: failing to understand the target of one’s bigotry. A transgender individual isn’t somebody who simply wears the clothing of the opposite gender. The term for that is cross dresser. Transgender individuals have software running on the wrong hardware.

Not understanding the target of one’s bigotry is almost as common as collectivist bigotry itself. Think of the neocons who hate Muslims. Most of them have a very warped understanding of Islam that is almost entirely shaped by cherry picking facts that fit their bias. Sexists and racists have the same issue. These misunderstanding usually lead to fear and hatred.

In the case of the dude whose comment I screen captured appears to view transgender individuals as sexual predators (after all, the transgender teen obviously only wants to use the women’s restroom so she can peep on other women even though she offered to isolate herself by using the restroom in the nurse’s office). This view leads him to believe that every girl in the school will suffer if this transgender teen is allowed to live her life in accordance to her gender. And that is ridiculous but inevitable when somebody develops a hatred of an entire group of people. When all you see are groups then any individual in a “bad” group necessary harms every individual in a “good” group.

I don’t subscribe to collectivism. While it is useful to refer to groups when discussing philosophy, religion, political beliefs, and other ideas commonly held by multiple individuals, we cannot make judgements about every individual in a group based solely on their membership in that group. Each and every one of us is a unique entity and can only be validly judged as such. Just because somebody is a communist, for example, doesn’t mean that they favor executing anybody who owns means of production. I believe the world would be a far better place if people started backing away from collectivist bigotry.

One thought on “Collectivist Thinking and Bigotry are a Dangerous Combination”