Since the release of the summary of the Central Intelligence Agency (CIA) torture report two camps have the developed. The first camp, made up of decent human beings, opposes the use of torture. One the other side of the isle is the camp, made up by a bunch of sick fuckers who have no value to humanity whatsoever, supports the use of torture. As the debate wages on the second camp, made up primarily of neocons who often accuse “liberals” of appealing to emotion, have been appealing to emotion with meme like this: 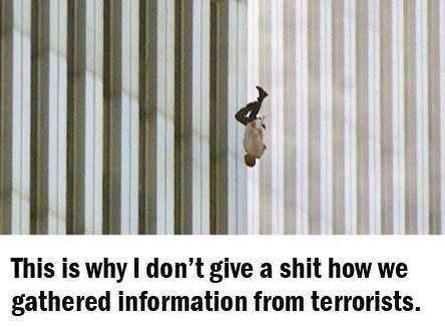 That is a picture of somebody who jumped from the World Trade Center during the 9/11 attacks. The implication is that torture is acceptable because some terrorists crashed some planes in the towers and killed a lot of people. For those of you posting this meme and memes like it would you kindly provide me with one things? Either explain to me how torturing people who had nothing to do with the 9/11 attacks will obtain justice for those who died in the attacks or provide me the decision from the publicly held jury trail that convicted the people being tortured of being involved in the 9/11 attacks.

Until you can provide one or the other please kindly go sodomized yourselves with retractable batons.