Those of you knee deep into liberty advocacy may have heard of Brad Spangler. If you haven’t heard of him then this post probably won’t be of much interest to you. But those of you who have heard of him probably now know that on Thursday he made a post on Facebook admitting that he molested his daughter. Just in case the post goes away I will include a screenshot of his confession. 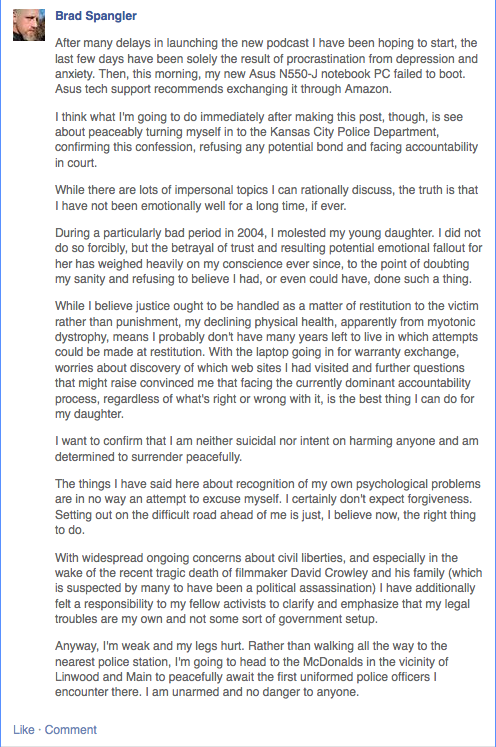 I don’t have much to say about Brad Spangler himself. His admission to molesting his daughter is enough for me to deem him a terribly human being, a disgusting piece of shit, and a man the world would have been better without. However I do want to talk about some of the discussion that cropped up in the aftermath of his admission. Namely the fuckwits who have deemed it necessary to use this to host the mother of all philosophical dick measuring contests. As of this writing there are about 2,200 comments on his Facebook post. If your faith in humanity is shaky I wouldn’t advise venturing through the comments because it will only show you that there are a lot of shitty people amongst anarchists and statists.

Pretty quickly after the post went up there were anarchist urging Spangler not to turn himself in to the state’s police and statist using Spangler’s confession as proof that anarchism can’t work. One guy even decided to use the confession as a platform to bitch about male circumcision. That’s right, a child was molested and the only thing these people can think about are arguments against each others’ philosophies.

Perhaps I’m not a zealous enough anarchist but I don’t think a child molester’s confession is the place to have a philosophical argument. I mean, come the fuck on. A man admitted to molesting his child and said he is going to turn himself into the police and your reaction is to urge him not to because the state doesn’t dispense justice. Then some statist arrive and say, “An anarchist molested his daughter therefore all anarchists are child molesters or sympathize with child molesters har har har LOLOLOLOL!” There are also right-libertarians laughing about this because Spangler is a left-libertarian and that somehow reflects on all left-libertarians because individualism is only a thing when you’re not trying to lump everybody you hate into a fucking box.

How about everybody take a few steps back and find somewhere else to debate philosophy? Is that too much decency to ask for? If so, could somebody stop this planet for a second so I can get off?