I offer this post in the hopes of being helpful to the gun rights community. As with any community the gun rights community has its good and bad members. While many of the old guard rub me the wrong way, specifically because of their socially conservative views, I don’t really hold them in ill regard. However, there are some positively vile members. One of those is Ted Nuget who not only involves himself in gun rights but is a member of the National Riffle Association’s (NRA) board.

Deciding he hasn’t been in the spotlight for saying vile shit for too long, Ted decided it would be a jolly good idea to post some anti-Semetic shit on his Facebook page. Here’s a screen shot in case the post is pulled: 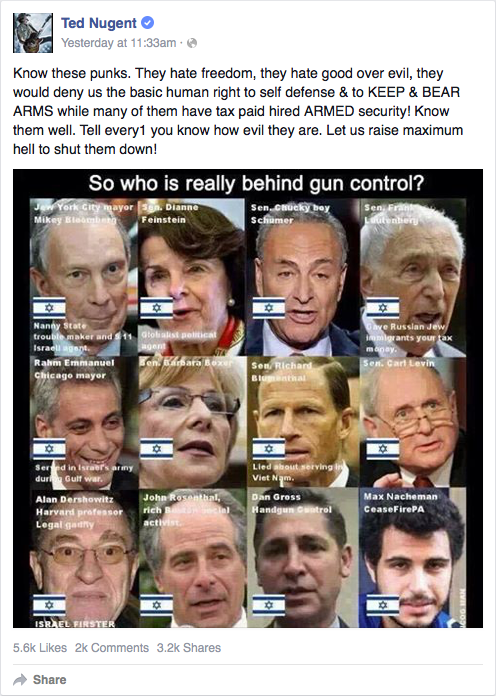 I feel it necessary to first point out that judaism and Israel aren’t synonymous. Unless Ted is implying Israel is behind the gun control movement, which would seem rather odd to me, he can’t even get his bigotry symbolism right.

Speaking of bigots, they really are my least favorite part of, well, pretty much any movement. My support for gun rights stems from my belief that everybody should enjoy a right to self-defense. I don’t care what your race, religion, sexual orientation, gender, or any other defining characteristics are. Hell, I don’t even care what species you are. If you’re an organism you have a right to fight anything that attempts to kill you.

My advice is that individuals involved in the fight for gun rights should strongly consider disassociating themselves with Ted Nuget. He’s a vile piece of shit that contributes absolutely nothing of value.