Kickstarter is used to get some really cool projects off of the ground but it’s also packed with half-baked ideas and outright scams. What I present here is a case of the latter. Meet the first encryption software engineered to defeat hacking programs, granting impenetrable data protection, and cloud storage (their words, not mine).

I’m not even sure where to start with this one so I guess I’ll start with the most obvious red flag, impenetrable anti-hacking software. Before starting this Kickstarter I assume the team worked on a unicorn ranch because they apparently have a knack for delivering the impossible. And if designing impenetrable software is possible it certainly isn’t going to be done by this team. Pulling off such a feat would require a great deal of technical knowledge and this team doesn’t appear to have that as I will demonstrate. Let’s begin with their statement regarding the Advanced Encryption Standard (AES):

In the late 1990’s, AES, while under ‘well-intentioned’ government oversight, somehow, a ‘back-door’ found its way into this ‘approved’ data security solution, — as has been widely reported. The unintended consequences of this back-door allows for complete access to your data, without your permission, to data monitoring, data-mining and active eavesdropping. Effectively, voiding your right to privacy and confidently. So common is this practice it has a name: Active Snooping.

There are known attacks against AES but none of them are practical. But the elite team of entrepreneurs (I’ll get to that in a bit) supposedly know of a backdoor. In fact this backdoor has supposedly been widely reported! Yet I’ve never heard of it, which I find odd because I follow the publications of quite a few computer security experts. I guess everybody from Bruce Schneier to Dan Kaminsky just missed that piece of news as well as this piece:

SSL is a Myth. Cybercriminals know about these flaws and back-door. They are stealing, compromising, and profiting from your data everyday.

SSL is a myth? Huh. As somebody who has spent many hours configuring it I would beg to differ. SSL, more accurately TLS, is a very real thing. It’s also secure so long as it’s configured correctly. Speaking of myths, or more accurately fiction:

I’m glad they mentioned 007 because this page reads like the “hacking” Q did in Skyfall. That is to say it’s nonsensical and entirely fictitious. Q gets a pass though because he’s a fictional character in a fictional universe where anything is possible. Even something as infeasible as a Walther PPK feeding reliably can happen in the James Bond’s universe.

Earlier I questioned DataGateKeeper’s team’s technical knowledge. This isn’t because they posted an incorrect minor detail about a complex mathematical factoid. It’s because they can’t even get basic units of measure correct: 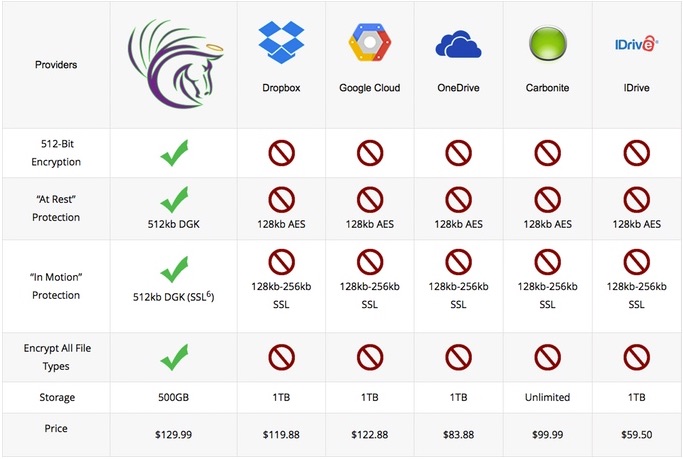 So. Many. Kilobits! Even if you’re only marginally aware of AES you’ve probably seen a mention of a 128-bit and a 256-bit mode. A kilobit is 1,000 bits so according to this chart DataGateKeeper has 512,000-bit encryption whereas services such as Dropbox and OneDrive lack even 128,000-bit AES encryption. Well that’s a no brainer since 128,000-bit AES doesn’t exist. Even if it did no consumer computer would have the processing power to use it. This chart should have added a row for unicorns. None of the competing services offer unicorns and I wouldn’t put it past the DataGateKeeper team to claim they offer unicorns.

Regardless of feasibility, DataGateKeeper is offering all of the kilobits:

That’s a lot of kilobits! But wait… now I’m confused. Earlier on the page it said:

So which is it? 512-bits or 512-kilobits? There’s literally a multiple of 1,000 difference. I’m sure that will be clarified at a future data. What we do know is that whatever algorithm they’re using is 6,000,000 times stronger than current data security:

We created a cipher that is 6,000,000 times stronger than current data security, as proven by algorithmic mathematics.

See? They proved it with algorithmic mathematics! That’s, like, the best kind of mathematics!

So how does this miraculous algorithm work? Who knows. The Kickstarter page, not surprisingly, doesn’t include any technical details. Okay, it does include a gif image with a calculator and some math-like stuff. It doesn’t actually explain anything but it’s there.

After reading this Kickstarter page you’re left with the feeling that it was written by marketing people who have no knowledge about cryptography. Even the most basic of information is either wrong or nonsensical. It’s almost as if there are no cryptographers involved with this project. In fact, that may be exactly what the problem is:

Our management team is uniquely qualified to implement our plan of operations, with a combined 75+ years of entrepreneurial experience, at all levels of corporate gestation, from rank start-up through to publicly traded entities. Our experience spans multiple sectors, from entertainment and manufacturing to healthcare and technology. The management team resume includes names such as: PepsiCo, Colgate-Palmolive, Paramount Studios and Merv Griffin Productions. Our President and co-founder, Debra Towsley, oversaw the marketing plan for Universal Studio’s $1.5 billion theme park expansion, Islands of Adventure®, as VP of Marketing. Our Chief Strategy Officer, Frank Ruppen, graduated from Harvard Business School, and cut his teeth as the brand manager for Proctor & Gamble, before accepting positions at McKinsey & Co., Sterling Brands, and Consumer Dynamics; he relocated to work in cities like: Sydney, Caracas and Tokyo. Raymond Talarico, our CEO, has been involved in multiple roll-ups and consolidations. He is credited as having developed companies from a one-sentence mission statement in MEDirect Latino to publicly traded entities with market caps exceeding $160M. The youngest member of our team, Joshua Noel (21), is the Creative Director who is a literal ‘Jack of All Trades’ when it comes to content creation. Yes, they do exist. His talent is on display here in the videos, as well as the vlogs, the overall design of our branding, and iconization.

They have people experienced in entrepreneurship but not a single mention of a cryptographer anywhere on the page is made. That pretty much tells us everything we need to know and explains why this page reads like a marketing person was tasked with writing a sales pitch on a cryptographic service but wasn’t given access to anybody knowledgeable in cryptography to verify any of the claims.

This is what a scam looks like. The product being offered is not only impossible but the entire writeup makes no sense within the framework of the market they’re aiming at. Scam might not even be the correct word for this. I would hope a scam artist would put some effort into making their scam at least appear somewhat believable. The people involved in this page didn’t even accomplish that much! DataGateKeeper’s team are scam artists who couldn’t even create a convincing scam. They’re basically failures who failed at failing.

At this point, when social media backlash destroys any chance of this Kickstarter getting funded, I’m expecting them to claim that this was all an elaborate troll. It really is their only option.

3 thoughts on “Anatomy Of A Scam”