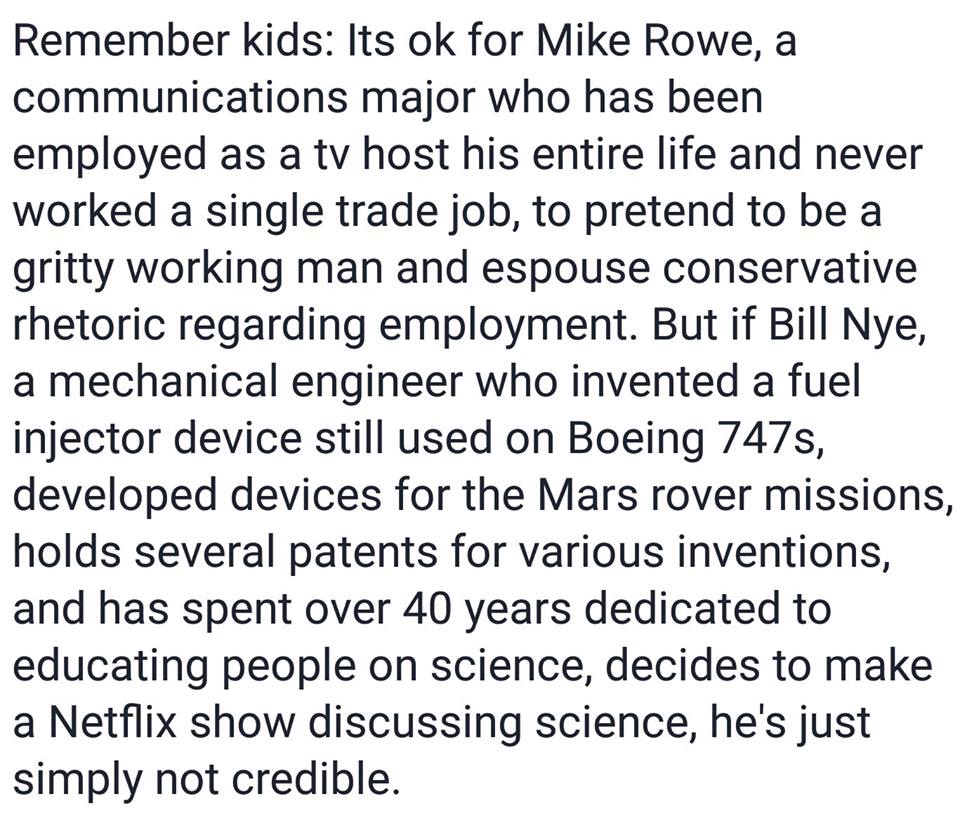 This image further demonstrations that the biggest advocates of scientism have a severe lack of understanding of the scientific method. The opening words in the image make sense within the framework of the debate. Conservatives have been arguing that Bill Nye lacks experience in scientific fields and is therefore unqualified to speak about scientific matters. In return the progressives are pointing out that Mike Rowe lacks experience in the trades. Here’s the problem, science isn’t a single discipline.

By the logic presented in the image one would certainly listen to Bill Nye on matters of mechanical engineering (at least matters that fall within his area of expertise). However, one would completely ignore anything he said about other scientific fields, such as the effects of widespread pollution on the biosphere, since he has no experience in those fields.

It’s quite possible for an individual to be very capable in one field and incompetent in another. Ben Carson is a great example of this point. He was a very skilled neurosurgeon. But his comment about pyramids being grain silos shows that his knowledge in the field of archeology is, to put it nicely, lacking. Likewise, it is also possible for an individual to be very capable in a field that they don’t work in professionally. Hedy Lamar had no formal scientific training yet she made several important discoveries, such as using frequency hoping to prevent enemies from jamming radio-controlled torpedoes (which was also an important contribution to the development of several wireless communication technologies that we rely on today).

In summary, both sides are being stupid. Each side is slinging mud at one of the other’s public face instead of debating the actual issues. One might expect such behavior from conservatives since they’re not beating the scientism drum but why would progressives, who claim to be believes in science, do the same thing? Simple, progressives are no more lovers of science than conservatives. They wield science much like conservatives wield Christianity. That is to say, they see science as nothing more than a concept they can exploit to forward their political goals.