The who trial of Bradly Manning finally concluded yesterday. Manning was acquitted of the most severe charge, aiding the enemy, but was found guilty of 19 other charges:

FORT MEADE, Md. — Bradley Manning, the Army intelligence analyst who laid bare America’s wars in Iraq and Afghanistan by covertly transmitting a massive trove of sensitive government documents to WikiLeaks, has been convicted on 19 of 21 charges, including 6 counts of espionage. He was found not guilty of aiding the enemy, the most serious and controversial charge laid against him.

Manning now faces up to 136 years in prison on his convictions.

Over a century in a cage for revealing the war crimes? The message being sent by the state is quite clear. While the state can intercept and listen to our phone calls, collect and read our e-mails, keep records of our purchases, and otherwise collect intelligence on us without our knowledge the agreement isn’t reciprocal. Or, to put it more succinctly: 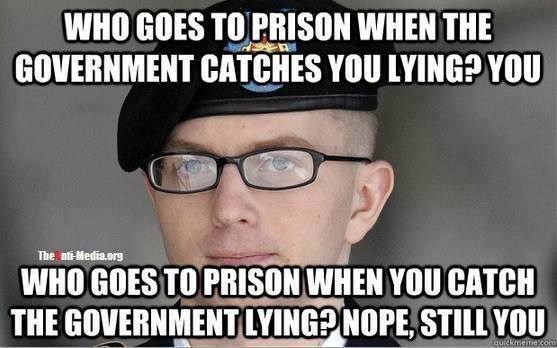 The state wants to maintain tabs on every person but will throw anybody who attempts to maintain tabs on it into a cage for the rest of their miserable life. Charges of cowardice were aimed at Edward Snowden when he fled the country but Manning’s trial demonstrates that Snowden did the smart thing. Staying in the United States after revealing its misdeeds is a recipe for disaster.