One of my pet peeves are agenda pieces pushed as scientific research. As the political climate in the United States becomes more toxic the propensity for individuals to create agenda pieces and attempt to pass them off as scientific research seems to be increasing, which isn’t surprising. Most of you who have read this far probably think I’m going to go into a tirade about global warming. I’m sorry to disappoint you but that’s not happening. No the subject of this post is a link that I’ve been seeing make the rounds in the social justice warrior circles. In their pursuit to be offended they have found a supposed research paper that demonstrates without a doubt that we’re all a bunch of sexist fucks:

ople don’t take hurricanes as seriously if they have a feminine name and the consequences are deadly, finds a new groundbreaking study.

Female-named storms have historically killed more because people neither consider them as risky nor take the same precautions, the study published in the Proceedings of the National Academy of Sciences concludes.

Well isn’t that something our societal sexism is literally kill us. Except, you know, it probably isn’t. A minor snag in the paper’s claim is accidentally mentioned in the article:

For the first 29 years of the hurricane naming system all hurricanes have been given female names. Now this may not seem significant in relation to the paper but it is. If you look a figure 10 on page 6 of this research paper [PDF], titled Deaths and Death Rates from
Extreme Weather Events: 1900-2008, you will see a rather interesting trend: 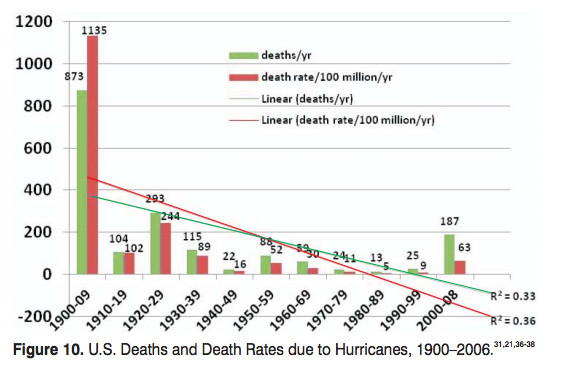 Will you look at that, it’s a noticeably downward trend! This shouldn’t be surprising. As our technology has improved, especially in regards to computer modeling, we’ve developed a better understanding of hurricanes. We can more accurately predict when, where, and how hard a hurricane is going to hit, which has allowed us to reduce the number of lives lost. Since for the first 29 years hurricanes had exclusively female names and since hurricane deaths have been steadily declining since 1900 it’s pretty easy to deduce that the reason more deaths have been caused by hurricanes with female names is because more hurricanes had female names when hurricanes were killing more people on average.

I actually hypothesize that the gender of a hurricanes’ name has no bearing whatsoever on the number of deaths it causes. This is because most sane people probably don’t put any bearing into a hurricane’s name. If it’s predicted to be a category 5 hurricane, for example, most people are going to get the fuck out of its way or find some serious shelter. That’s because the category, not the name, is what most people are going to base their course of action on. As much as the social justice warriors hate to hear it most people aren’t actually so petty as to risk their life on things as pointless as the gender of the name of a hurricane.

Sorry social justice warriors, I usually try to avoid involving myself in your wars. But when you claim to have scientific proof that society is made up of sexist, racist, homophobic, transphobic, misogynistic men I’m going to look at the research and see if the conclusion is plausible or if there’s another possible explanation. If the conclusion isn’t plausible and there is a much more scientific explanation I am going to call you on your bugshit craziness.