You writers at Salon are like an enteral fountain of stupid ideas. That’s probably because… 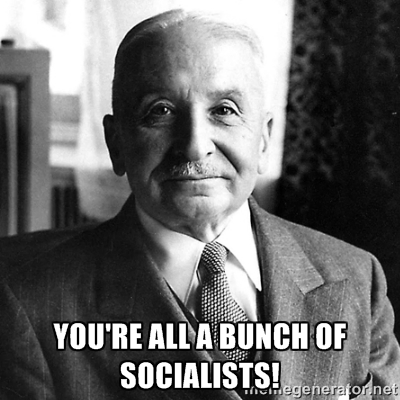 More to the point, you’re all a bunch of state worshiping socialists. As far as you’re concerned the only problem in this world is that we don’t have a state boot stomping on our faces quite enough yet. And that leads you to say really stupid things like this:

They’re huge, they’re ruthless, and they touch every aspect of our daily lives. Corporations like Amazon and Google keep expanding their reach and their power. Despite a history of abuses, so far the Justice Department has declined to take antitrust actions against them. But there’s another solution.

Is it time to manage and regulate these companies as public utilities?

No. No it’s not. And I’m going to tell you why it’s not by using your own stupid arguments against you. You see, every argument you use against Google and Amazon can be equally applied to the state.

Big Tech’s services have become a necessity in modern society.

Then why ruin it by giving it over to the state? The only thing the state does competently is steal and break shit. While it does throw some money at private companies to build substandard roads much of its resources are invested in militarizing the police so they can better murder our pets, building more efficient ways for our military to blow up people overseas, and protecting the politically connected private companies from its not as well connect competitors.

If Google and Amazon were nationalized the would use them to collect even more data on you and I. Gmail would exist to allow the state to know when we’re communicating about something illegal and our purchases on Amazon would be scrutinized to see if some tangible connection to terrorism could be made. Google Maps would probably be used to drop Hellfire missiles on whoever used it as well.

They’re at or near monopoly status – and moving fast.

The state is a monopoly. In fact it is the monopoly that makes all other monopolies possible.

They abuse their power.

And what does the state do? Let me think. It sends heavily armed men to kick down people’s doors at two in the morning, shoot their dogs, and kidnap them for possessing a fucking plant. Then you have the National Security Agency (NSA), which is the state’s apparatus for spying on our phone calls, e-mails, instant messages, and other communications. When it finds a little free time it also likes to put people to death even though the evidence supporting those people’s guilt is nonexistent. I haven’t even gotten to the number of foreigners it slaughters.

They got there with our help.

The real “commodity” is us.

Guess what? The state’s commodity is us. We’re nothing more than tax cattle and cannon fodder to it.

Edward Snowden really brought this point to light. The NSA has been spying on our digital communications for years. While I dislike many of the data collection policies used by Google and Amazon there is a major difference between what they do and what the state does with my data. Google and Amazon use my data for personal profit and to find more shit for me to buy from them. The state uses my data to decide whether or not it will send armed thugs to my home at two in the morning so they can shoot my pets and kidnap me. I’d say that’s a pretty big difference.

Freedom of information is at risk.

Are you referring to the Cyber Information Sharing Act (CISA)?

The free market could become even less free.

They could hijack the future.

So could the state. The difference, of course, is that Google and Amazon hijacking the future doesn’t lead to people being locked in cages, bombed, and otherwise brutalized.