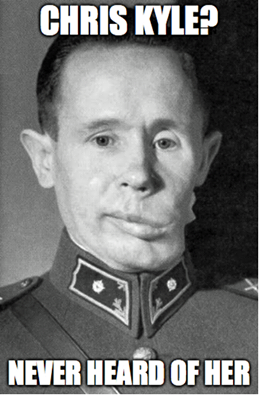 American Sniper is getting a lot of press. One side sees it as a movie about an American hero who rightly put a bunch of terrorists into graves. The other side sees it as a movie about a murderer and a liar. Based on what I’ve read about Chris Kyle’s life I’m guess we wouldn’t have gotten along. Furthermore the movie seems to be very popular amongst neocons so I won’t bother seeing it because I don’t want to be stuck in a theater with a bunch of people who have a raging erection because they’re watching Muslims being killed left and right.

Enter Simo Häyhä. Simo Häyhä was a Finnish sniper that operated during the Winter War. For those unfamiliar with the Winter War it was an attempt by the Soviet Union to take over Finland. It didn’t end well for the Soviets. Using a modified Mosin-Nagant rifle, that didn’t have any optics I might add, Simo Häyhä managed to get somewhere between 505 sniper kills.

Simo Häyhä is also a more interesting individual in my opinion. First of all he was engaged in a war against an invading force instead of being a member of an invading force. The man was literally protecting his home. Another thing that’s worth noting about Simo Häyhä is that he was a humble man. He didn’t go around bragging about all of the commie he killed, he didn’t start random fights in bars, and he didn’t make up stories about traveling to other places to kill people. After the Soviets were run out of Finland he made a life for himself by moose hunting and dog breeding.

So when I hear people talking about “America’s greatest sniper” I can only chuckle. Chris Kyle, at best, managed roughly half of the kills that Simo Häyhä had, was a jackass if his own accounts of his actions are to be believed, and was helping to expand a tyrannical regime instead of defending against one.