Franklin Graham, the son of Bill Graham (who made a hilarious guest appearance in The Illuminatus! Trilogy), is your typical religious zealot. He espouses a belief in god, hates everybody who isn’t a cisgender heterosexual, and becomes sexually aroused when in the presence of authority. That last part really confuses me though. As a Christian I would think he would find it sinful to worship the false idol of the state. After all, Jesus was about as anti-state as one could get and ended up being killed by the Roman state because of it. But Graham loves the state so much that he took time out of his busy day of judging everybody (which is also something I thought Christians were supposed to refrain) to write a very important message on his Facebook wall: 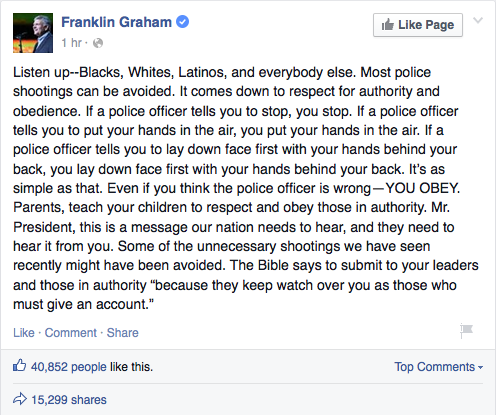 In other words as long as you’re an obedient little slave you (probably) won’t get hurt! This is one of the sickest messages imaginable. He just justified any police action taken if somebody refuses to get down on their knees and kiss an officer’s boot. I though this was supposed to be the freest goddamn country on Earth and a nation of laws. In a free state (I know that’s an oxymoron) one would be free to disobey unlawful orders regardless of who barked them. And a nation of laws would hold everybody to the same standard regardless if they wear a shiny badge and a silly looking costume or not.

This is an attitude shared by most of the touch on crime fuckwits. Not only is it an endorsement of fascism but it’s also blatant victim blaming. Blaming somebody who was shot dead by a cop for refusing to obey an unlawful order is right up there with blaming a woman who was raped for wearing too short of a skirt. If a cop acts unlawfully they are the wrongdoer. Period. There is no situation where a cop shooting somebody that doesn’t comply with an unlawful order is OK.

Franklin Graham is one of those people on my very long list of psychopaths who should be shipped to a deserted island in the middle of the Pacific to isolate their wickedness from civilized society.

As an aside, I wonder how Graham copes with his belief that homosexuality is a sin and getting a raging erection every time he’s in the presence of a male police officer.