This weekend the Minnesota Republican Party had its State Central Committee Meeting. I’ve never attended one of those nor will I ever but I have friends who were there so I got to see some of the shenanigans that went on during the event. At first I didn’t think there was going to be much to write about. The meeting just sounded like another political party circlejerk where elected party politician ‘A’ says some nice things about elected party politician ‘B’ and is reciprocated.

But you can always count on somebody showing up to a political event and ruining it for everybody. In the case of this meeting, being a Republican Party function, that prize went to the Child Protection League (CPL). After looking them up I discovered that the CPL seems to be primarily focused on shaming members of the kink community and getting transgender individuals to commit suicide.

Via Rob Doar’s Twitter feed I was able to see the fly handed out at the meeting by the CPL: 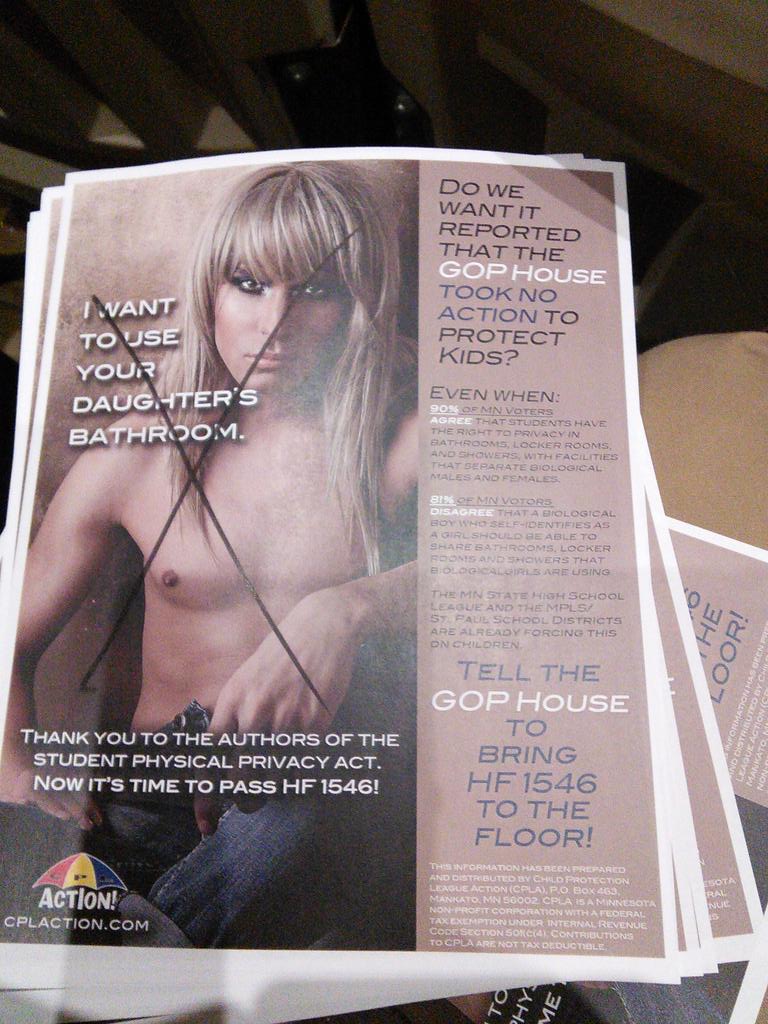 Under the guise of protecting the children, a guise favored by every politician, the CPL is showing it has no interest in protecting transgender children. If it did it wouldn’t be pushing state legislation that would further oppress transgender individuals because that oppression comes with an extremely high suicide rate.

In addition to showing the complete ignorance of transgender individuals the CPL holds this flyer also demonstrates the problem with political solutions. What the CPL is advocating is a state law. The estimated population of Minnesota is 5,457,173. That means the CPL wants a law passed that would mandate over 5 million people behave in a certain way. Specifically it would mandate that every public school in the state force transgender students to use the bathroom of the gender they don’t identify as. This would undo local decisions such as the policy enacted in Minneapolis.

Ironically what I’ve just described is what small government advocates always pretend to want. Republicans usually claim to be small government advocates but many of them get excited every time somebody presents them with a state or federal law that would mandate discrimination against a group they dislike. Fortunately my friends at the meeting scoffed at this flyer but I know there are a lot of Republicans that agree with what it says. Widespread support within the party is the reason the CPL came to the meeting to hand out flyers. Until the vast majority of the Republican Party speak out against laws such as HF 1546 nobody is going to take it seriously when its members call themselves the party of small government.