The Trace, an anti-self-defense rag masquerading as a news source, posted what may be one of the dumbest arguments against arming, well, anybody but soldiers at recruitment centers specifically:

Most armed service members are not trained to neutralize active shooters, and putting more loaded guns in their hands creates its own risks.

Most service members — 99 percent of airmen, 88 percent of sailors, and about two-thirds of soldiers and Marines — are not in direct combat roles, but instead are technical workers whose specialties support those “tip of the spear” troops. These include navigators, supply clerks, water purification specialists, and camera crews. Roughly the same breakdown applies to the backgrounds of recruiters and reservists. Practically speaking, this means that your average military member’s firearms experience may only go as far as some boot camp familiarization with a service rifle on a “static range,” plinking at paper targets to qualify for a marksmanship ribbon.

I’ll be sure to tell my friend who was a helicopter mechanic in the Marines that his firearms training amounted to little more than plinking at paper on a range. Less I digress further into the firearm training military personnel receive let me make my point. Stopping an active shooter, in most cases, doesn’t require any special training. All that’s required are bullets moving towards the shooter. As it turns out most active shooters commit suicide upon meeting armed resistance:

But as much as we would like to confront the active shooter with multiple officers, the reality is that we are almost always in a reactive posture, and time is working in favor of the shooter. More often than not, we must wait for the incident to unfold before we are able to interject ourselves into the fray. Depending on the venue, whether it occurs in a big city or an isolated rural community, that response with well-trained responders may be a while in arriving.

Therefore, the individual officer becomes our best asset. Ideally, we’d like to have a response in which we send in several similarly trained officers, but that may not always be possible. Thus, the responsibility rests with the first car on the scene, and in these types of incidents it’s important to get inside and act quickly. By doing this, we interrupt the killer’s plan and his activity. This rapid interdiction is critical to saving lives.

However, quickly inserting oneself into the active shooter situation does not mean running blindly into a gun battle. Rather, it simply means stopping the shooter as fast as possible, either by lethal means or by the mere fact that he knows law enforcement is present. That knowledge alone, that cops are on scene, has ended the carnage in many instances and caused the gunman to commit suicide.

Therefore, the key to reacting to an active shooter situation is rapid response – get on scene and inside as quickly as possible.

Police “training” for active shooter responses is for the first officer on the scene to move in and start sending bullets at the shooter. That’s because response time is the key factor for how long an active shooter scenario will play out. The sooner somebody is able to provide armed resistance to an active shooter the sooner the situation stops in a vast majority of cases. The “training” that is supposedly absent from boot camp is having a gun and using it to shoot at the active shooter. Anybody who has gone through basic training in any branch of the military can handle that. Hell, I can handle that.

There isn’t a good argument against armed individuals at the scene being the most effective way to resolve active shootings. An active shooting is a scenario where, in the vast majority of cases, accuracy and tactics aren’t the primary deciding factors in how quickly it stops. Even a man at the scene wearing a stylish tactical neon shirt and camouflage Crocs armed with a potentially felonious foregrip equipped sightless AR-pattern pistol would be more effective against an active shooter than waiting for police to respond. 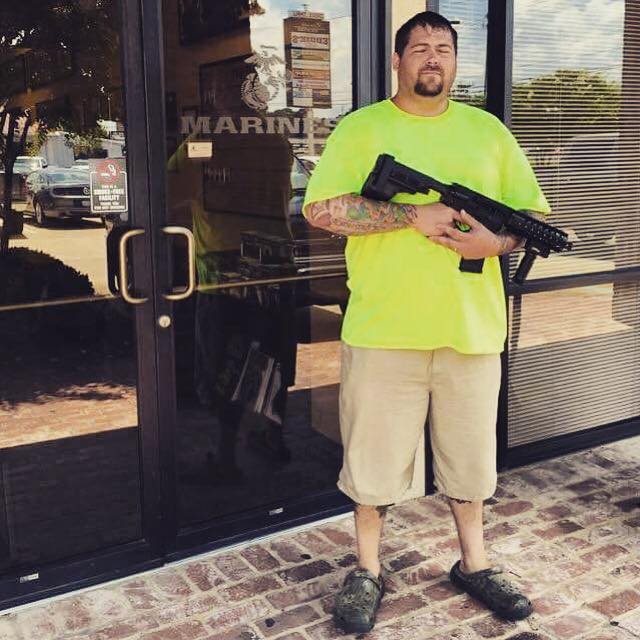 Still more effective than waiting for police to respond.

One thought on “Stopping Active Shooters Is About Armed Resistance, Not Special Training”