In 2016 a wannabe commando unit was sent to a holding cell by a civilian judge to stand trial for a crime they did commit. These men promptly escaped from jail to the New York City underground by posting bail. Today, still wanted by the police, they survive as soldiers of fortune. If you have a problem, if no one else can help, and if you can’t afford anybody better, maybe you can hire the B-Team.

He and two friends Dean Smith and Kimberly Arendt were stopped by police for driving with a cracked windscreen.

They told the arresting police officers that they were a group of vigilantes on their way to rescue a teenage girl.

I know this story is going to raise a lot of question. For starters, how did the police identify this crack commando team? Obviously they went to great lengths to be as inconspicuous as possible… 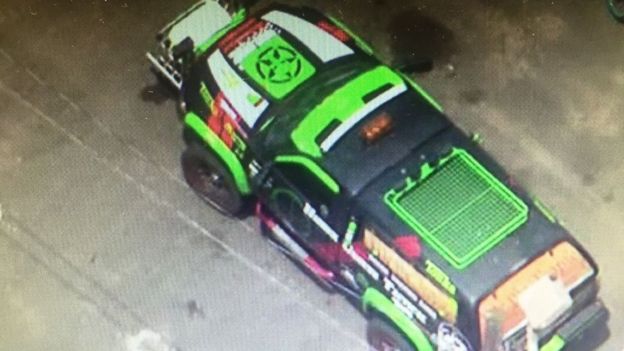 Nothing says inconspicuous like a truck with neon green tastelessly plastered all over a truck. The target reticle painted on the side is a nice touch as well. I’m sure you’re wondering what the B-Team’s load out was.

A camouflage helmet, seven guns including rifles, and knives were recovered from the car, as well as cannabis, body armour and 2,000 rounds of ammunition.

2,000 rounds of ammunition? I bet they were planning on using discount Mini-14s (Is there a discount Mini-14? Maybe, like, a Hi-Point carbine or something?) and didn’t plan to hit anything they shot at.

One thought on “The B-Team”