An Oklahoma lawyer performed a successful denial of service attack against a courthouse:

The Rogers County Courthouse in Oklahoma closed early Monday due to bed bugs.

Rogers County Sheriff Scott Walton said a lawyer came up to a third-floor courtroom with bugs falling out of his clothing.

Courthouse officials had a meeting and decided to close the courthouse until the bed bugs were gone.

This might be a good card to keep in your back pocket in case you’re ever in court and want an extra day or two to get your defense in order.

Here’s something to amuse you, an opinion article written by a Transportation Security Agency (TSA) schmuck who thinks ordering people to throw away bottles of water and touching children is a tough job.

Though we’re just enforcing the rules that keep the public safe, most people treat us as the jerks who take away their nail clippers.

That’s because you are jerks who take away nail clippers.

Gun buybacks are not only improperly named (you can’t buy back something you never owned in the first place) but they’re also pointless. However, they’re often good for a few laughs. Take this wonderful woman for example:

One woman shows us the 9MM she is turning in for the Baltimore City Gun Buy Back program. But she says she is using the cash to get a bigger weapon! Story on FOX45 at 4pm. pic.twitter.com/LlmCbezpU7

I love it when people blatantly mock government nonsense.

A Russian online mapping company was trying to obscure foreign military bases. But in doing so, it accidentally confirmed their locations—many of which were secret.

The Federation of American Scientists reports that Yandex Maps blurred out “over 300 distinct buildings, airfields, ports, bunkers, storage sites, bases, barracks, nuclear facilities, and random buildings” in the two countries. Some of these facilities were well known, but some of them were not. Not only has Yandex confirmed their locations, the scope of blurring reveals their exact size and shape.

Them: “What’s your stance on the Second Amendment?” 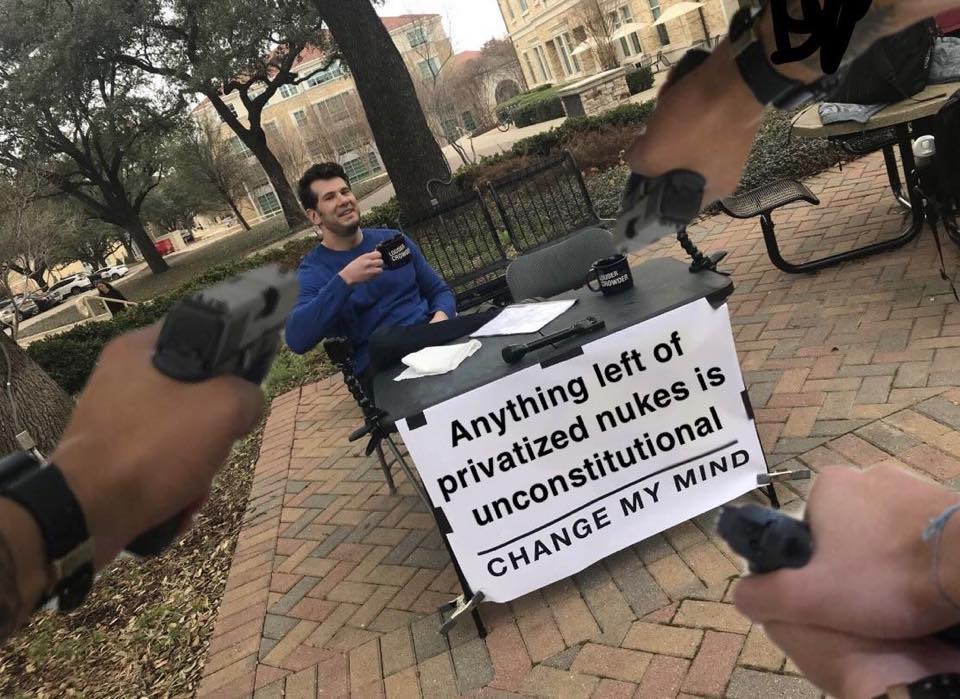 An 82-year-old great-grandmother from Texas voted for the first time ever during this year’s midterm elections. Gracie Phillips was battling pneumonia and in hospice care when she voted early Thursday. Sadly, just four days after casting her midterm ballot, Phillips died — but not before she had her voice heard and her opinion counted, her granddaughters told CBS News.

This woman voted for the first time in her life and just a few days later, BAM, dead.

It turns out that the spell checker on my new laptop is really intuitive: 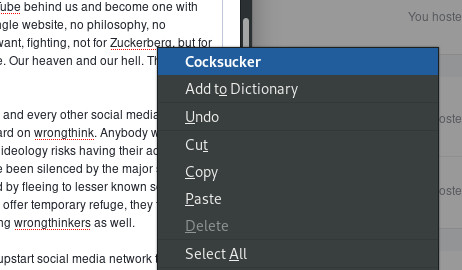 It also turns out that when you accidentally have Firefox’s spell checker language set to English (Malawi), hilarity ensues.

Tuesday’s election resulted in a prisoner, dead pimp, and man with a thing for Bigfoot erotica all winning offices. We truly do live in the best timeline.

There are certain crimes that are justified by the circumstances under which they were perpetrated. This is one of them:

A scientist accused of attempted murder in Antarctica stabbed his colleague because “he was fed up with the man telling him the endings of books,” it has been claimed.

It is believed to be the first time a man has been charged with attempted murder in Antarctica.

I doubt that there’s a jury on the planet that will convict him.

White smoke signals that the gender has been revealed.

Black smoke signals that the gender has not been revealed.

An off-duty border patrol agent wanted an explosive gender reveal party for his family and friends, but he ended up igniting a wildfire that spread to Coronado National Forest in Arizona.

Dennis Dickey, 37, of Tucson, Arizona, has to pay more than $8 million in restitution, starting with a $100,000 initial payment and monthly payments thereafter, the Department of Justice said in a statement.