I had two primary motivations when I started my training regimen. My first motivation was enjoying the benefits of being physically fit. People who are physically fit can do more for longer and are harder to kill. My second motivation was to further divorce myself from the State. As an agorist I’m used to discussing ideas behind divorcing one’s self from the State. Most of these ideas involve avoiding paying taxes, buying permits, and otherwise providing money to the State. But there are other ways you can increase your independence from the State. Healthcare in this country has become almost inseparable from the State. Being healthy makes you less reliant on the healthcare system and therefore increases your independence from the State. As a slight aside, I did have an additional minor motivation, which was to simply not become the stereotypical fat white guy at the gun range.

At the beginning of the year my workout regimen wasn’t set in stone. I played with things until I found what I liked. One of the things I played with were kettlebells. I don’t like going to gyms so working out at home is a far more preferable option. Kettlebells are nice in that they’re relatively affordable and you can perform a full workout with them in even a small room. They’re also good for building both strength and stamina since many of the lifts are explosive in nature, which puts stress both on your muscles and your cardiovascular system. So I started with a 25 pound kettlebell (upper body strength has never been a strong suit of mine and was the primary limitation to the weight I could workout with) and slowly moved my way up with the goal of using a 50 pound kettlebell by the end of the year.

At the beginning of June my workout regimen started to stabalize. I alternated days between body weight exercises and the Simple and Sinister kettlebell program, which is built around swings and Turkish get ups.

Although a shoulder injury knocked my progress back I’m happy to say that last night I finally achieved the goal I set for myself at the beginning of the year: 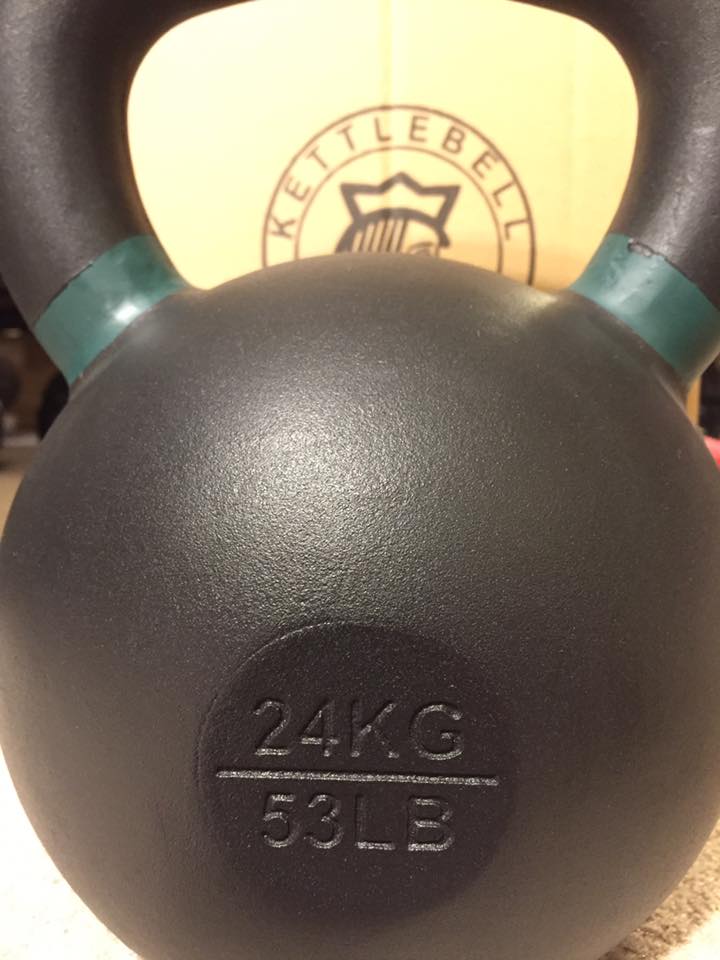 Until now I’ve been using enamel coated CAP kettlebells. They’ve served their purpose and I feel that they offer good bang for your buck but the handles are just a hair smaller than I’d like and the enamel coating is pretty brittle. This time around I decided to spend a bit more and was happy to receive quite a bit more.

My new kettlebell is a powder coated piece of iron made by Kettlebell Kings. So far I’m impressed. The powder coating is grippier than CAP’s enamel coating, the handle is wide enough where I can get the entirety of both of my hands in it, and there are no rough edges inside of the handle (the CAP kettlebells sometimes have a seem inside the handle but it’s tolerable because the enamel coating smooths it out mostly). I did my first workout with it last night and really enjoyed it.

However, I don’t think the UPS driver enjoyed it. I’ve unintentionally been a dick to him because I’ve ordered all of my kettlebells online (Amazon Prime is wonderfully abusable for this) and he’s had to deliver ever increasingly heavy boxes to my apartment and I’m not planning on letting up on him anytime soon.