Since Diamond Reynolds livestreamed the aftermath of Castile’s death the cop apologists have been desperately trying to spin the preceding events in a way that justified what Officer Yanez did. Now that the jury has ruled that Yanez wasn’t guilty of manslaughter based on the explanation of the statute that was provided to them, they’re celebrating. Of course, their celebration involves making a great many false claims.

One of the worst dens of cop apologists that has popped up on the Internet in recent times is Blue Lives Matters. Whenever an officer is involved in a use of force case the writers of that site are quick to character assassinate the victim, anybody connected to the victim, and anybody who disagrees with their narrative. Not surprisingly, their spin requires a great deal of speculation or outright false claims.

“Philando Castile responded, “I don’t have to reach for it,” while reaching in the area where his gun was located.”

This statement is entirely speculative. Many cop apologists have pointed out that the dashcam footage doesn’t show what was happening inside of the car, which is correct. However, usually immediately afterwards, they then say that Castile shouldn’t have been reaching. Since the dashcam video doesn’t show the inside of the car there’s no way to know whether Castile was reaching for anything, had both of his hands placed on his steering wheel, or was playing with a Rubik’s Cube while eating ramen with chopsticks.

It was later determined that Castile was high on marijuana at the time of the stop, which impaired his ability to listen to Officer Yanez when he was instructed not to reach for his gun. Officer Yanez shot Castile after he ignored orders and reached towards his gun.

This is speculative but bordering on lying. Toxicology noted that Castile had THC in his body. However, that doesn’t mean he was impaired (“high”). THC can remain in the body for months after using cannabis so the fact that it was in his system doesn’t indicate that he had recently used the it. Furthermore, different people react differently to THC. Some people are not impaired by even high levels of THC. There is no way to know whether or not Castile was impaired from the THC in his system.

In fact, Officer Yanez asked for Philando Castile’s license and insurance near the beginning of the stop and Castile had already handed over paperwork before informing Officer Yanez about his gun.

I’m highlight this except because of what comes afterwards. From the court documents here are the contents of Castile’s wallet after he was killed. Specifically note his drivers licensed (middle card on the right side). 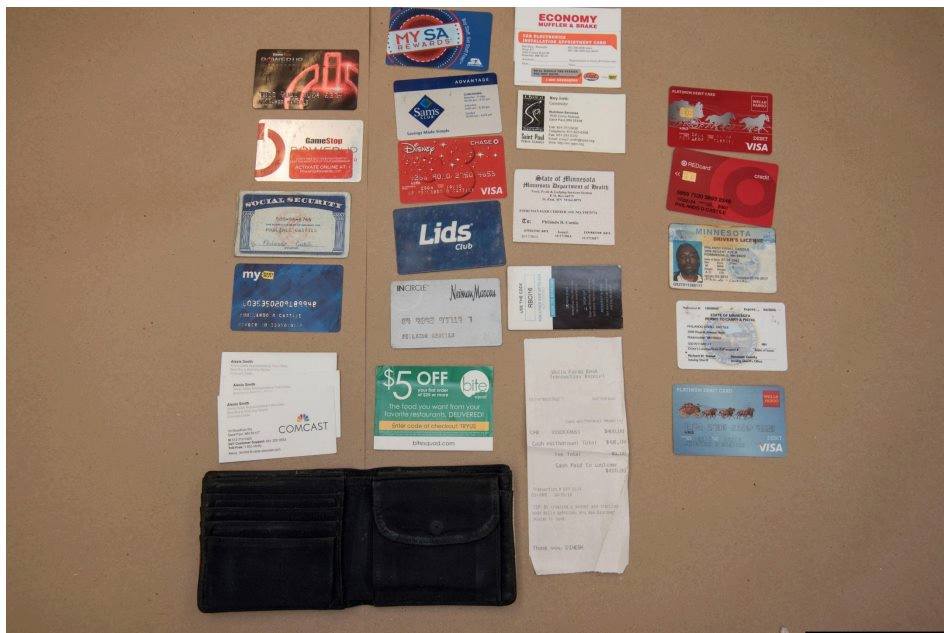 As you can see, this is entirely false. Castile clearly had a drivers license to hand Yanez and since it was in his wallet after he was killed he hadn’t handed it over yet. Officer Yanez clearly asked for Castile’s license and registration. Castile hand’t completely complied with his order before being shot. Even if Castile was reaching for his wallet, which we don’t know he was, he was doing so under orders from Yanez.

St. Anthony Police Officer Jeronimo Yanez had stopped Castile’s vehicle on July 6, 2016, because he believed Castile might have been involved in a convenience store robbery a few days earlier.

After making speculative and outright false statements the article moves on to character assassination.

Castile’s long previous criminal history does not show a tendency toward violence, although he had been stopped 52 times in the past few years for traffic-related issues.

Long criminal history is hyperbole at best. Castile was stopped 46 (six of the 52 noted incidents were for parking violations, not traffic violations) times but it was always for minor traffic-related incidents:

Castile had been stopped before, when officers spotted him not wearing a seat belt, or when an officer ran his plate number and found his license had been revoked for not paying an earlier fine. Numerous stops came after he didn’t use a turn signal. A few came after he was speeding. He was stopped for rolling through a right turn on a red light, having window tints that were too dark, and at least twice for not having a rear license plate light. He was rarely ticketed for the reason he was stopped. His interactions with police eventually slowed. Although he was continuing to receive licensing and insurance violations, there were only seven incidents involving police contact from 2011 to when he was killed.

About half of Castile’s charges were ultimately dismissed after he paid fines, made plea bargains, took driving courses, and in one case paid $275 to not have two violations show up on his record. (Previous media reports said he had been stopped 52 times; however six of those incidents were for parking violations.) He represented himself in most of the cases. At least three times the court granted him a public defender, which is provided to defendants who cannot afford a private attorney.

After the Philando Castile shooting, Diamond Reynolds lied after Castile was shot and said that he didn’t have any criminal history. Reynolds also lied by claiming that she was Castile’s fiance, when she wasn’t. She claimed that she was held overnight by the police, when she was only interviewed for two hours before an officer bought her groceries and took her home. And Reynolds claimed that police didn’t provide first aid to Castile, when they did.

We now know that Reynolds’s account of the shooting did not reflect what happened.

Diamond Reynolds was later arrested in an unrelated case for being involved in an attack, using a hammer to attack other women.

This is a great example of the tactic I mention early on in this post. The writer wasn’t only content with assassinating Castile’s character but he felt the need to assassinate the characters of those connected to him. What Reynolds did or did not say after Yanez killed Castile has no relevancy on whether or not Yanez’s actions were justified or not. Likewise, her previous arrest is entirely irrelevant to the case. The only reason to bring it up is to establish guilt by association.

I hope this analysis was educational and illustrated some of the common tactics used by cop apologists when an officer is involved in a seemingly unjustified use of force.

2 thoughts on “Lies and Damn Lies”