For low-paid contractors who do the grunt work for big tech companies, the incentive to keep silent is more stick than carrot. What they lack in stock options and a sense of corporate tribalism, they make up for in fear of losing their jobs.

One European Facebook content moderator signed a contract, seen by the Guardian, which granted the company the right to monitor and record his social media activities, including his personal Facebook account, as well as emails, phone calls and internet use. He also agreed to random personal searches of his belongings including bags, briefcases and car while on company premises. Refusal to allow such searches would be treated as gross misconduct.

Following Guardian reporting into working conditions of community operations analysts at Facebook’s European headquarters in Dublin, the company clamped down further, he said.

Contractors would be questioned if they took photographs in the office or printed emails or documents. “On more than one occasion someone would print something and you’d find management going through the log to see what they had printed,” said one former worker.

Socialists are quick to blame working conditions described in the article on capitalism. However, the paranoia demonstrated by government owned and operating factories in socialist nations indicates that this behavior isn’t unique to capitalist employers. I believe that working conditions like those described in the article are a product employees not recognizing their own worth and that they’re not the company for which they work.

Let’s address the first part, an employee’s worth. The employer-employee relationship under capitalism is far more balanced than socialists like to admit publicly. While socialists won’t publicly admit that the employer-employee relationship is balanced they do acknowledge it in their strategies because their strategies are built on employee actions such as strikes and, in the case of more radical socialists, sabotage. Strikes rely entirely on the fact that an employer is reliant on their employees.

If a large percentage of Google’s and Facebook’s employees quit, both companies would suffer a great deal. Facilities deteriorate without maintenance personnel. Software can’t be written without developers. Web infrastructure tends to fail without information technology personnel to maintain it. Without employees to perform all the daily tasks that keep Google and Facebook running, both companies would grid to a halt.

An employee’s worth extends beyond the confines of whatever company they’re working for at a given moment. If they’re even mediocre at performing their job, they can generally find employment elsewhere, especially if they have a big name like Google or Facebook on their resume. Many employees let themselves become psychologically reliant on their employer. It’s like they believe that their the skills they’ve developed can be seized by their employer if they leave. Skills are something you take with you when you leave an employer, which is why employees shouldn’t be afraid to walk away from an employer.

If your employer is treating you poorly, take your skills to another employer or use them to start your own business.

Now let’s address the second part, the fact that an employee is not the company for which they work. I think I can best summarize this with a meme. 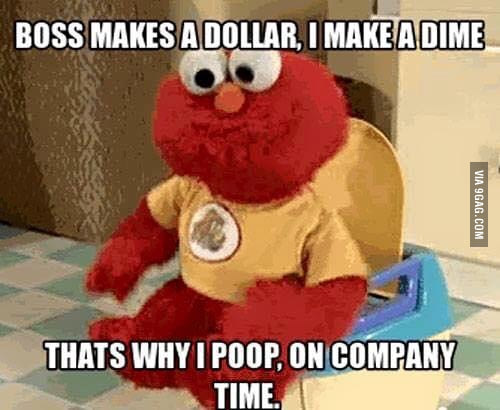 If the company an employee works for makes major profits, they may not see any additional pay. The profits go to the person who is taking the risks, the employer. On the surface this may look like a raw deal for employees but it offers them a great deal of freedom. If the company goes bust, the employer goes broke but the employees get to walk away with any money they’ve made and skills they’ve developed. In other words the success of an employee isn’t dependent on the success of any single employer. That being the case, employees should recognize that they’re effectively mercenaries and that their loyalty should be first and foremost to themselves.

I believe if employees recognized their own worth and that they’re not the company for which they work, employers would be far more hesitant to establish working conditions like those described in the article due to the fear of pissing off their employees enough to convince them to leave.