Yesterday I headed over to /r/Libertarian hoping to skim a blog worthy story or two from the cesspool of neoconservative talking point. My quest almost turned out to be fruitless until I decided to look at things from another perspective. Instead of looking for an interesting story to discuss I decided to look for a link that embodied some of the reasons I find politics to be a pointless exercise. That quest was a rousing success. I could have posted many stories here but I settled on one that managed to unintentionally summarize one of the things I hate most about politics into a simple image. Take a look at this comic: 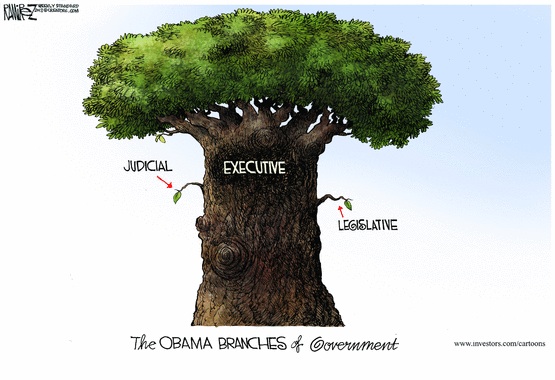 If you’re a neoconservative who thinks that the only thing wrong with America is the president then this image probably gives you a throbbing hard-on or makes you moist between your legs. It’s pure, unbridled Obama hatred packed into a 71 kilobyte, 555×380 pixel image. But, like most political cartoons, it’s a lie. The author would lead you to believe that Obama has claimed all the power for his branch of government and rendered the other two impotent. It’s a crock of shit, which brings me to one of the things I hate a politics the most: the tendency to grossly oversimplify matters.

Although the example I picked is neoconservative in nature, the neoliberals aren’t innocent of such chicanery. In fact it was only two election cycles ago where the neoliberals blamed all of the world’s ills on George W. Bush. Now that their man is the figurehead of America all of the ills of this country are due to “obstructionist Republicans in the House.” You can see that both sides share a common trait: everything bad is always the other side’s fault and everything good is always their side’s doing.

I have a theory about why such behavior is prevalent in politics. Politics requires one to believe in the currently established system, at least to some extent. How else could one claim that the country can be saved so long as the “right people” get into office? Why else would one work for the “right person’s” campaign unless they believed the system itself can be used to affect positive change? If you truly believe the system is broken, if you truly believe the system can’t be used to create a better future then you will find no point in participating in it. Since individuals who participate in the political system believe that, at least in some capacity, the system is legitimate they must find another reason why their vision for the “best future” isn’t being executed. Some of these people blame uneducated voters while others blame certain politicians.

You see, if the system is legitimate then society’s ills must be caused by something besides the system itself. Taking the system itself off of the table removes a great deal of complex societal issues. Fixing society’s ills, for example, is as simple as putting the “right people” in charge of the legitimate system. Since most people believe that their vision is the one true vision they inevitably find the parties responsible for society’s ills: those who hold different political ideologies. We now have an “us” them and a “them” team. Depending on how you identify yourself politically the composition of “us” and “them” will differ. In the case of Republicans the “them” team is made up of Democrats. Team libertarian sees team “them” as a bunch of pinko socialists. Self-declared conservatives have a tendency to blame “the liberals.” It’s very convenient but it boils very complex issues down to gross generalizations.

Returning to the comic we see that the author believes the executive branch has all the power. I’m sure, in his head, all would be well again if the three branches had equal power. The good news is that each branch does have equal power. How the hell do you think the executive branch enjoys its vast power? Congress has to pass the budget that allows the executive branch to execute its whims. The judicial branch has been more than happy to rule the vast powers of the executive branch as constitutional. We don’t have a compartmentalized system where each branch fights the other two branches. What we do have are three members of the same team. All three branches of government are helping each other because they know if they scratch their fellow’s back they will likely get their back scratched in return. But since individuals involved in the political process believe the system, in some capacity, is legitimate they can’t bring themselves to make such criticisms.

There you have it, a long-winded rant about one of the inherit characteristics of politics that I detest. This, among many other reasons, is why I refuse to further participate in the political process. I will note work on a campaign, run for office, or vote. As far as I’m concerned the entire system is part of the problem and any work performed within that system is a complete waste of my time. If I want to have heated debates about meaningless topics I will stick to ones about which superhero is more bad ass. At least debates about superheroes are entertaining because the characters involved are larger than life. Debates about political figures are depressing because the characters are petty criminals who get their rocks off on wielding power over their fellow individuals.

2 thoughts on “Another Reason I Find Politics Trite”