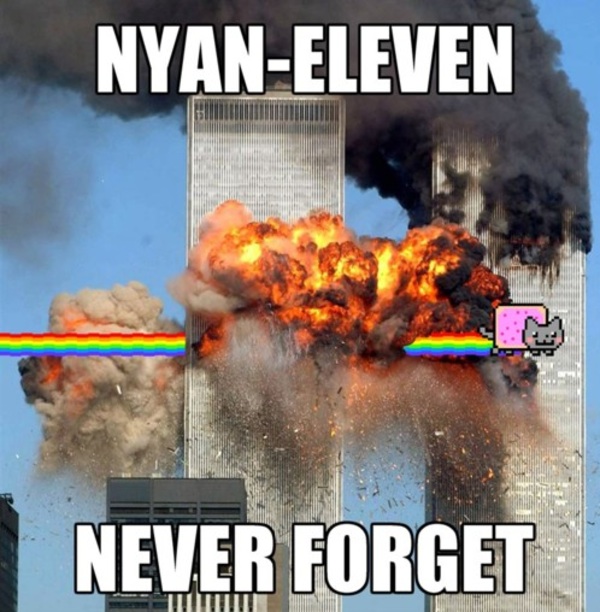 That image should sufficiently piss a bunch of people off. Now that I’ve weeded out the easily offended it’s time for me to put forth a proposal. Every year on September 11th we take time out of our busy schedule to remember those who died during the World Trade Center attack that happened on September 11th, 2001. Shortly after the attacks people talked about the need to continue living our lives as we had been and not giving into the fear. Not too long after that the message changed. We were supposed to continue living our lives as we had been but we were also supposed to be scared of the terrorists. As is common the message of fear was precursor to war and we ended up going into both Afghanistan, a place the played a sizable role in the collapse of the Soviet Union, and Iraq, a place we had been to before and no actual justification for going there again. And that brings to my proposal. I hereby propose that 9/11 be named Fear Day.

My reason for this is simple. Every year on the anniversary of the 9/11 attacks our politicians begin talking about the need for Americans to fear somebody. This year it’s the Islamic State (IS), which Obama gave a prime time Two Minutes Hate against last night. And today people all across the country are going to find ways to overtly and tacitly connect the 9/11 attacks and the IS. Every one of those connections will be based on fear of what happened 13 years ago. Meaningless phrases such as “Never again!” and “Never forget!” will be parroted by those who have succumbed to the state’s fear mongering of the IS.

Since we’re subjected to this fear mongering every goddamned year I figured it’s high time to make an official holiday out of it. There’s a lot we could do to celebrate a holiday based on fear. For example, we could have an official Two Minutes Hate:

That would be fun! We could also have play a game where we each try to turn in as many of our neighbors as possible for suspicious activities. Not only would that game help instill fear but it would teach us to be ever vigilant. How about a tradition of going to our local police station and confessing the instances of wrongthink we’ve had over the last year? It would be a great way to help the police identify those who commit the most instances of wrongthink, which would help them keep a more watchful eye on potentially dangerous citizens. And no holiday would be complete without a parade! For the Fear Day parade local police departments could get out their armored personnel carriers, don their riot gear, and load up their rifles for a march the Soviet Union would be envious of:

Of course the police would be expected to load their grenade launchers with candy filled canisters so they can launch much coveted sweets into crowds of children!

Let me close this proposal but wishing you a frightening Fear Day! Now run along and spread the word!