On Thursday some of us Defcon attendees went to Sunset Park for the Toxic BBQ (the food wasn’t toxic but the 100 degree weather was pretty brutal to this Minnesotan). During the BBQ I met Dallas, a speaker at Defcon who invited us to attend his Skytalk at 0900 the next morning. His talk was about this little guy (pardon the shitty photography, I’m not a photographer and the lighting in the hallway wasn’t ideal): 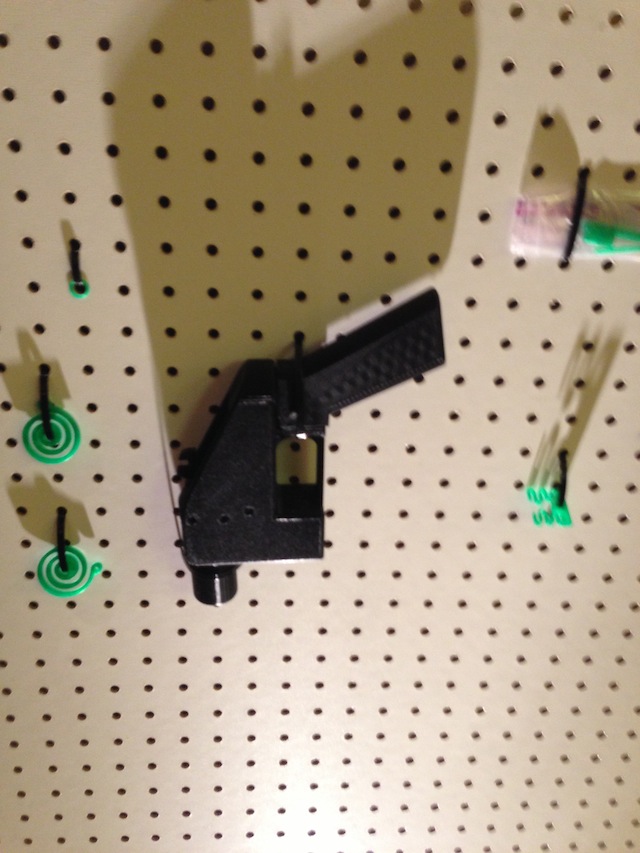 If you don’t recognize it it’s the 3D printed Liberator Pistol. While I’ve read and written about the Liberator many times on this blog, this was the first time I was able to look at and touch one. It’s a rather crude weapon, which I expected since it’s a prototype, but a novel idea. If you look at the picture you’ll see the main pistol, which was printed in black polylactide (PLA), and the internal parts, which were printed in green PLA. The green parts were printed smaller than the design requires so assembling the parts wouldn’t allow one to have an operating weapon (this was done because security at the Rio was apparently uncomfortable with the idea of bringing in a working pistol).

The two presenters, Dallas and Sean Wayne, did a marvelous job of presenting the weapon. They covered the legal matters involved with manufacturing a Liberator (namely you must include at least 3.7 oz. of ferrous metal in the design and you cannot transfer it), the capabilities of the pistol, their adventure with getting the pistol through airport security (as checked baggage, which is what you must always do to legally fly with a firearm), and why the Liberator, at least as it currently stands, is impractical.

The Liberator isn’t the most capable weapon. Considering the entire weapon, with the exception of the firing pin and the legally mandated chunk of metal, is made of plastic the weapon has some notable weaknesses. During the presentation we were told that 10 firing is the generally accepted maximum a Liberator can handle. Since the pistol brought by the presenters was printed on a MakerBot with PLA, instead of something like acrylonitrile butadiene styrene (ABS), it wasn’t safe to fire (PLA is brittle and the pistol at the presentation would have exploded if one tried to fire it). Furthermore, the pistol has an issue with leaking gas from the trigger cutout, which is likely to burn the person shooting it. Once again, being a prototype, none of these issues surprised me.

I found their experience trying to travel with the pistol interesting. Because they didn’t want to chance being locked in a cage the pistol was transported just like any other firearm, by declaring and checking it. What was interesting was that the employees at the airline were rather baffled by the plastic pistol (in my experience airline employees are often baffled by any firearm) and ended up calling over a Transportation Security Administration (TSA) agent. Unlike the entirely clueless airline employee, the TSA agent recognized it as a pistol and allow the declaration and checking to commence as usual. This may be one of the few times an agent of the TSA performed a competent job. It’s also nice to know that flying with a Liberator is treated no differently than flying with any other firearm.

The Liberator is a cool concept but, as it currently stands, is impractical. Reloading it is a ponderous task because you must remove the barrel, and the gun can’t survive many firings. As a member of the audience pointed out, one would have better luck going to the hardware store, buying a few dollars worth of metal parts, and slapping together a zip gun that would almost certainly be more reliable than the Liberator.

Of all the presentations I attended this was one of the most interesting (in part because I’m a gun nut but also because I love the concept of 3D printers). I’ve wanted to look at and touch a Liberator since it was first unveiled by Cody Wilson. Now that I have seen one I can say that my initial impressions were correct. It’s a really cool idea that will only get better in time. According to Sean and Dallas, the Defcad community is has already released a fourth major version of the Liberator design. With such rapid improvements it’s likely that we’ll see a reliable single-shot 3D printed pistol in no time. Once that’s been accomplished it’ll be time to move on to a semi-automatic 3D printed pistol.