Regulatory agencies have for a long time been the tool of choice for the executive branch when it wanted to target things it didn’t like but didn’t want to wait for approval by the legislative branch. The current head of the executive branch has made no attempt to conceal his distain for guns so it’s not surprising to see that he sicced his dogs on firearm sellers:

The administration is using an anti-credit card fraud effort dubbed Operation Choke Point to go after legitimate businesses it deems “high-risk,” says a staff report by the House Committee on Oversight and Government Reform.

Internal Justice Department documents show that Attorney General Eric Holder was informed that small businesses were being hurt by the operation as banks dropped them and exited entire lines of business deemed “high-risk” by the government, yet his department has continued to pursue the operation, the report says.

The Washington Times has reported that several gun retailers have been dropped by their banks as a result of the operation — the most recent being Powderhorn Outfitters, a sporting goods shop in Hyannis, Massachusetts, which was dropped last week by TD Bank after a 36-year business relationship.

And gun stores aren’t the only organizations being targeted by Operation Choke Point. The Washington Times included a convenient picture that covers other so-called high-risk businesses that have cause the Department of Justice’s ire: 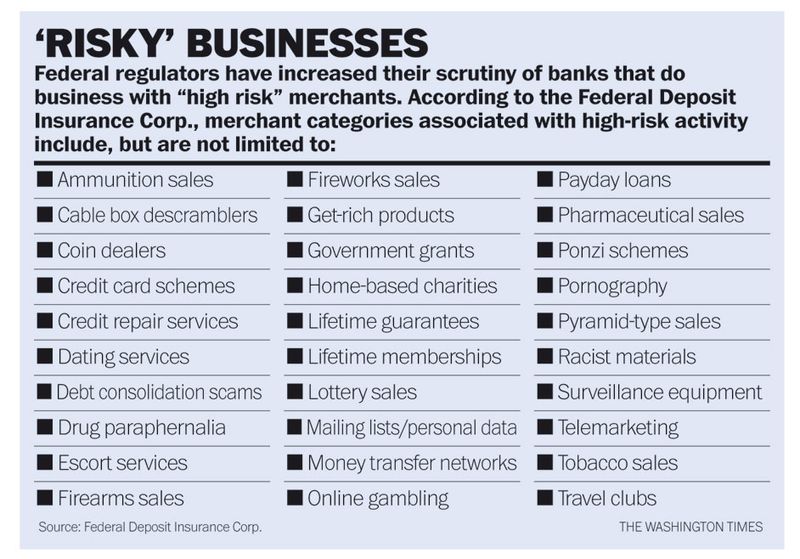 It’s pretty ironic that surveillance equipment made it onto a government list of high-risk merchants but I digress. While many people are focusing on the gun store angle specifically I think the take away from this story is that giving the state regulatory power is dangerous. Whenever something bad happens the government always steps in and offers to regulate that bad thing. If the Democrats are in power then self-proclaimed Democrats take the government up on its offer. If the Republicans are in power then self-proclaimed Republicans take the government up on its offer (even though they claim to want a smaller government). Neither side stops to consider the fact that their party won’t be in power forever and when the party in power changes those new regulatory powers will be used in a different manner.