Many gun rights advocates complain that anarchist don’t do anything to advance gun rights. While they’re pander to politicians, attend meetings, and advocating for or against legislation they see us not doing so and assume we’re just sitting around with our thumbs up our asses. But we work smarter, not harder. With the realization that any political gain can be reversed down the road we look for ways to bypass the political machinery altogether.

One of the anarchists on the forefront of the gun rights battle is Cody Wilson. He brought us the first notable 3D printed handgun. Now he’s bringing us a milling machine designed specifically to produce AR lowers:

When Cody Wilson revealed the world’s first fully 3-D printed gun last year, he showed that the “maker” movement has enabled anyone to create a working, lethal firearm with a click in the privacy of his or her garage. Now he’s moved on to a new form of digital DIY gunsmithing. And this time the results aren’t made of plastic.

Wilson’s latest radically libertarian project is a PC-connected milling machine he calls the Ghost Gunner. Like any computer-numerically-controlled (or CNC) mill, the one-foot-cubed black box uses a drill bit mounted on a head that moves in three dimensions to automatically carve digitally-modeled shapes into polymer, wood or aluminum. But this CNC mill, sold by Wilson’s organization known as Defense Distributed for $1,200, is designed to create one object in particular: the component of an AR-15 rifle known as its lower receiver.

Gun control is irrelevant in a world where anybody can manufacture a firearm. And that’s the goal, make politics irrelevant by utilizing technology:

Wilson’s goal of enabling anyone to privately fabricate an untraceable gun is part of a larger anarchist mission: To show how technology can render the entire notion of government obsolete. He’s spent the last two years developing firearms designed to be printed as easily as ink on a page, neutering attempts at gun control. “This is a way to jab at the bleeding hearts of these total statists,” Wilson says. “It’s about humiliating the power that wants to humiliate you,” he says.

Why beg masters for scraps from the liberty table when you can build your own liberty table and eat as much as you want? A popular agorist saying is “Agora! Anarchy! Action!” In it’s even on a poster 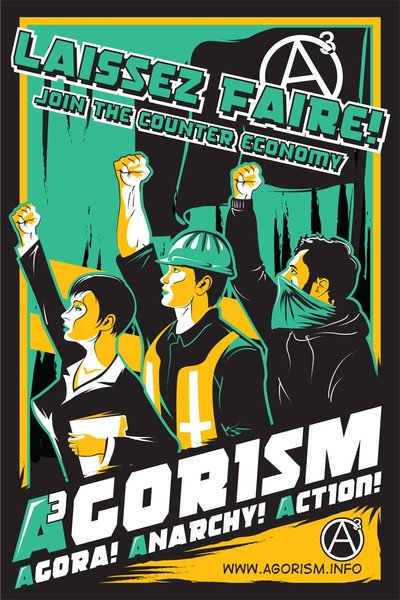 The keyword is action. Anarchists, I would argue, have a tendency to directly take action over the statists’s tendency to ask others, specifically politicians, to take action. We prefer to get our hands dirty, which is necessary when you’re working for radical change. I do wish politically active gun rights activists well but if the political atmosphere starts looking bad again us anarchists will ensure that any guns banned by the state are readily available to as many people as possible.