Look at me, my name is in the news!

This is my fifteen minutes of “fame”, bear with me. It’s actually a good overview of the panel discussion I had the privilege of being on. If you haven’t and don’t want to watch the video this article gives the thumbnail summary. By the way, I’m not actually a cryptographer and am not sure how that title was attached to my name. Oh well.

Tonight I have the honor of being a part of a panel discussion on mass surveillance with William Binney and Todd Pierce. The event will be held at the Bent Creek Golf Club located 14490 Valley View Rd, Eden Prairie, Minnesota 55344. Doors, and the bar, open at 18:30 and the discussion is scheduled to start at 19:00. There will also be free pizza served at 20:30.

All the information you need can be found on the event’s Facebook page.

Wednesday June 3rd I will be participating in a panel discussion with National Security Agency (NSA) whistle blower William Binney and retired Judge Advocate General (JAG) Todd Pierce. The event will be focused on ending mass surveillance in our lifetime. Binney will likely be addressing the issue from a political activism viewpoint, Pierce will likely focus on legal matters, and I’ll be addressing the issue from a technical viewpoint.

The event will be held at the Bent Creek Golf Club in Eden Prairie. It’s scheduled to start at 19:00 and end at 20:30. There is no admission fee but drinks are going to cost you.

The guys over at Anarchy in Action put together a short video from AgoraFest 2014. Since we’re already in the process of planning AgoraFest 2015 I thought it would be a good idea to post this video as it gives a small idea of what the event is (which is to say it’s not a bunch of people dressed entirely in black plotting to blow up some bridges): The second event takes place on October 18th and will be held at St. Paul Harley Davidson in, as the name implies, St. Paul, Minnesota: 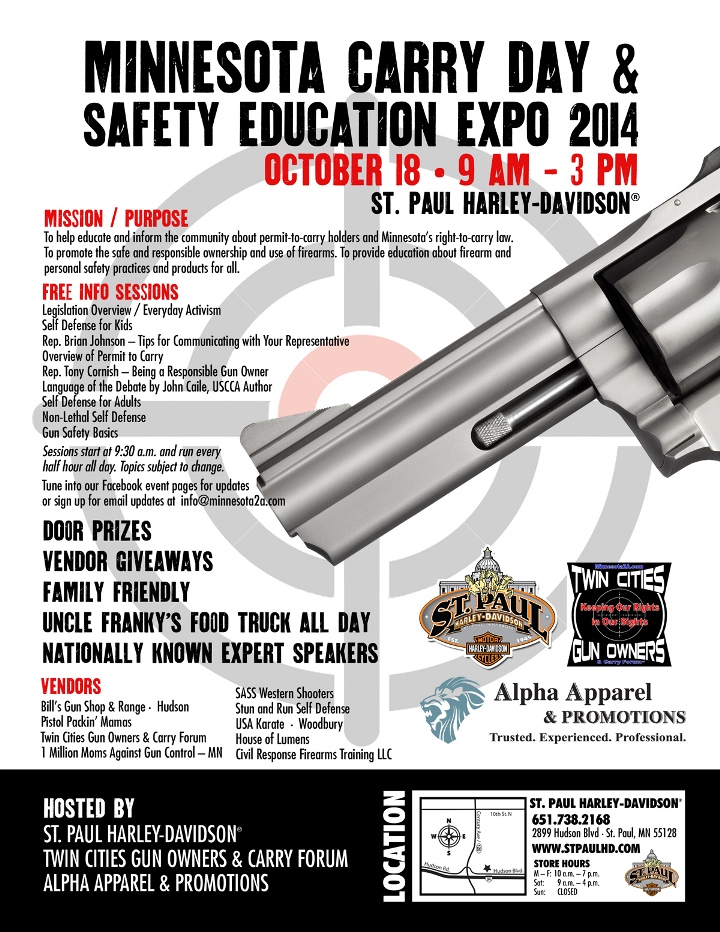 This weekend I was at the second annual AgoraFest. As the event’s namesake is taken from agorism it’s no surprise to know that it was total anarchy. That is to say the event was absent of coercive force, devoid of hierarchy, and much mutually beneficial trade occurred. Unlike political events, AgoraFest’s speakers didn’t spout of violent hate speech. There were no psychopaths urging the bombing of a foreign country, arrest of nonviolent people, or further militarization of the police. We were fortunate to be joined by Jack Shimek, a agorist who was good friends with agorism’s founder, Samuel Edward Konkin III. He’s working on some interesting things that I’ll discuss more when they’re announced to the public.

In addition to giving an introductory course on firearms (which was requested by an individual who didn’t even show up) and lock picking I also spent my time being the event’s network ninja. We setup a mesh network using Ubiquity NanoStation and PicoStation access points running Commotion Wireless firmware. The event was hosted at the Villa Maria in Frontenac, Minnesota so cell coverage was sparse. Likewise the Villa Maria only has Internet access in the main building. Using our access points we were able to span the distance between the main Villa Maria building and the cabins where the event took place. Overall we covered a distance of roughly 1,200 feet, which was made difficult by sparse availability of power outlets (we had one 500 foot span because there were no power outlets that allowed us to shorten the distance). While the Villa Maria’s Internet connection isn’t stellar the setup allowed us decent coverage of slow Internet access instead of no coverage at all. It was a fun experiment and I look forward to improving the network next year.

I had a great time but it was also a lot of work so I’m taking today off of blogging (at least anything other than the Monday Metal entry and this post) to recuperate. Between Defcon and AgoraFest I’m pretty burned out this month but it was well worth the hassle.

I received an e-mail alerting me that the Twin Cities Gun Owners and Carry Forum is hosting its 2nd annual family picnic on August 9th at Boom Island Park in Minneapolis. It’s scheduled to go from 11:00 until 15:00. The website for the event is located here and the Facebook event can be found here. 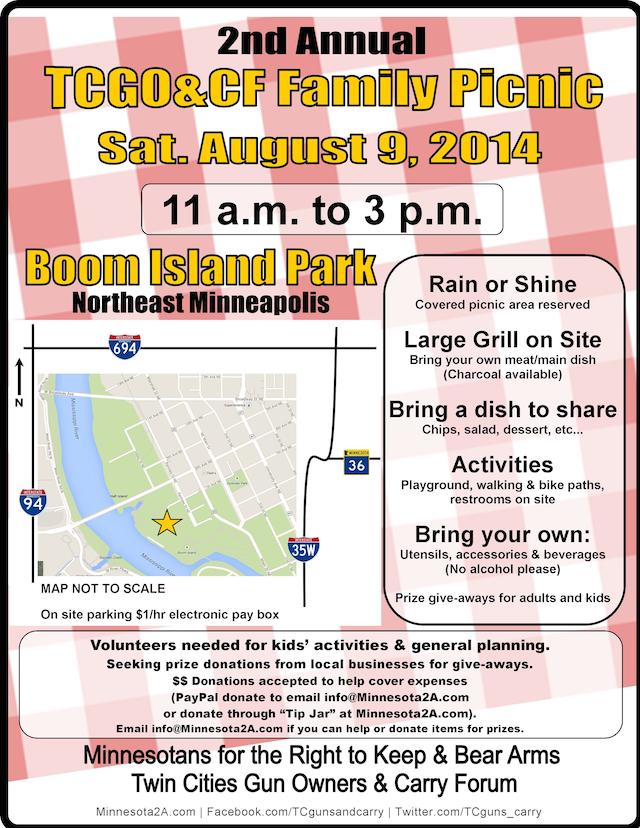 I will be at Defcon during this event so I won’t be able to attend. But it’ll probably be a good time for you if you’re into guns (which I’m assuming you are since you’re reading this blog).

Are in or near Minnesota? If not, are you willing to travel to Minnesota? Do you want to get your counter-economics on? Have you been looking for an event where you can hang out with agorists instead of people who want to vote their way to liberty? If so I have the event for you, Agorafest 2014! That’s right, after last year’s success we’ve decided to host another weekend of telling the state to go fuck itself.

For those who haven’t heard of Agorafest (which is probably a large number of you since last year was the first year) it’s a conference for agorism. Agorism, for those unfamiliar, is a strategy of attaining liberty not by begging our masters (also known as politics) but through counter-economics. In other words it’s a strategy to live freer today by using voluntary cooperation amongst like-minded individuals. You can read all about it in And Agorist Primer [PDF]. Like any good conference, Agorafest will have food and alcohol available. We will also have vendors because counter-economics isn’t much fun if there isn’t, you know, economic activity.

Agorafest 2014 will take place on August 22nd through the 24th at the Villa Maria Retreat in Frontenac, Minnesota. All of the information is available at the registration page. We’re still getting the schedule of events up but we will have a wide selection of counter-economic discussions and workshops just like last year.

Looking through my recent posts I discovered that I had forgotten to actually publish this post. In the spirit of better late than never I hereby notify my readers that there will be a firearm carry and safety expo on November 2nd at Zylstra Harley-Davidson in Elk River, Minnesota: 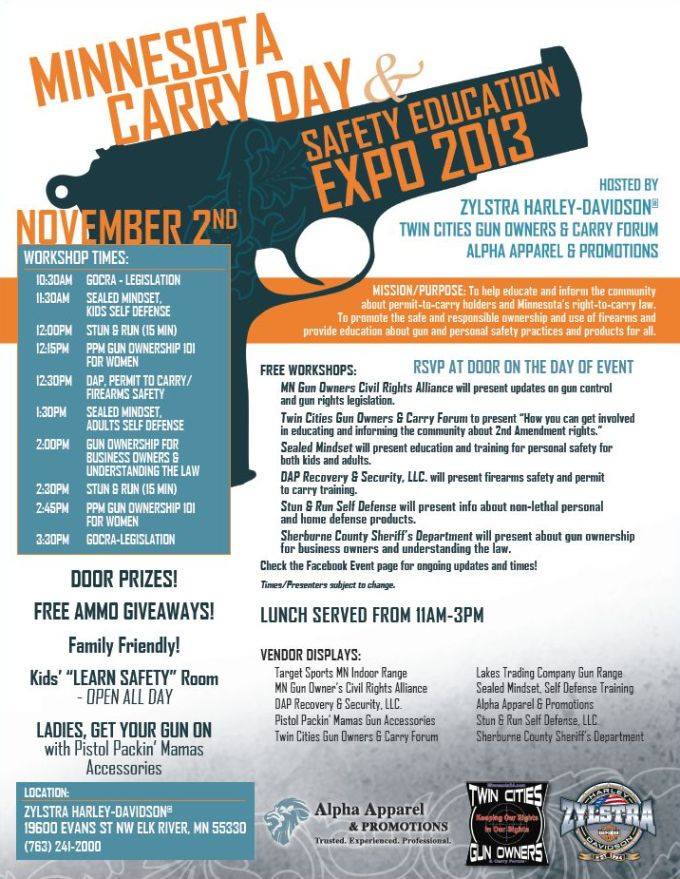 I’ve got nothing for you today, sorry. This week has been a little hectic as I’ve been finishing up what I need to do for my AgoraFest talks. If you look at the schedule you’ll note that I’m doing four presentation on crypto-anarchy covering Off-the-Record Messaging, OpenPGP, Tor, and TrueCrypt. I will also be giving a short presentation during the Ten Talks about my idea to stop basing societal agreements on geographic location.

Anyways, I plan to be back on Monday with more material. Until then enjoy yourselves and remember that it’s not too late to sign up for AgoraFest.